The meaning of "facts" in the medieval judiciary system should be examined starting from the two fundamental models of legal procedure established between the 12th and 13th century, i.e. the accusatorial and the inquisitorial procedures. In principle, matters of facts ("quaestio facti") were distinguished from matters of law ("quaestio iuris"), but both the construction of the fact and its autonomy from the law were different in the two procedures. In the accusatorial procedure facts did not exist as something independent from the claims of the contending parties. Consequently the fact was determined by the various stages of the legal process: it was first defined in legal terms in the "libellus" that contained the accusation, and it was then disassembled and reassembled according to the versions of the litigants in the "positiones", and in the questions to be asked to witnesses. In the inquisitorial procedure, in contrast, the assumption that an objective truth could be discovered led to a notion of proof based on independently "real" facts. In this system, however, a key role was played, besides factual evidence, by the personal reputation ("fama") of the accused, which heavily influenced the criteria of conviction or acquittal. The essay focuses on the contrast between the truth of facts and the truth of persons. The conclusion is that in the medieval judiciary framework the possibility of conceiving facts irrespective of persons was very remote. 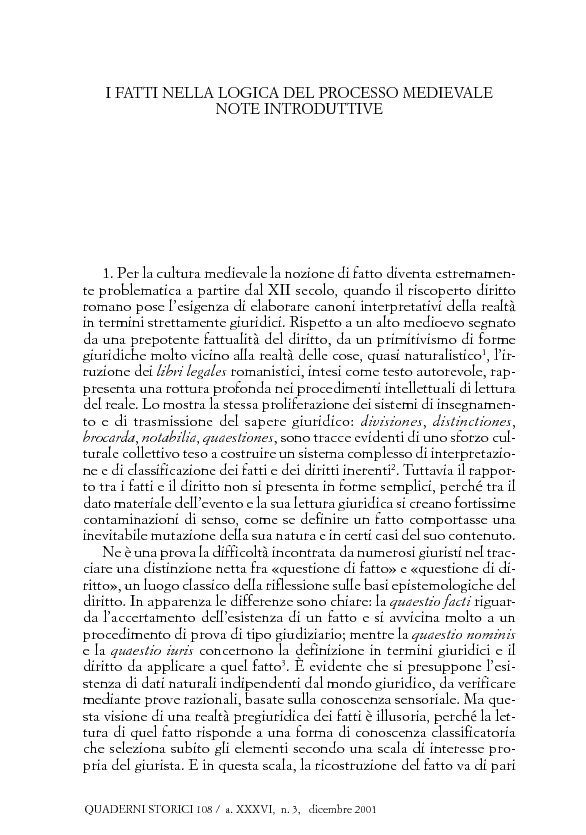