The author examines political candidates' speeches during the French elections of 1936 which brought to power the "Rassemblement populaire", known as the Popular Front. By analyzing the corpus of documentation - declarations of faith ("profession de foi"), party platforms, radio addresses, films and documentaries, posters, and pamphlets - one is able to grasp the continuity and variations in the political language, as well as the effectiveness of the discursive strategies adopted. The use of the radio and, to a lesser extent, propaganda films, as well as changes in the political system and international order, all contribute to the restructuring of speeches because, after all, the electorate prefers simple and incisive expressions and formulas dealing with general and fundamental themes ("pain, paix et liberté" or, on the other side, "Le Front populaire, c'est la guerre"). Furthermore, the presence of the socialist and communist parties' platforms almost completely replaces the declaration of faith ("profession de foi"), which increasingly surrenders its discursive function through which the connection between the candidate and his constituency is reinforced. On the other hand, the speeches to adherents of the radical party, which is not structured as a popular party, preserve this role, like the speeches of rightwing parliamentary groups. This allows us to observe the persistence of traditional models and political conceptions, for the entire period between the two world wars. Finally, as a result of studying the models of argumentation and the political vocabulary, one finds elements of great innovation in the communist rhetoric, which has distanced itself from tones of class struggle and moved towards expressions of national reconciliation. 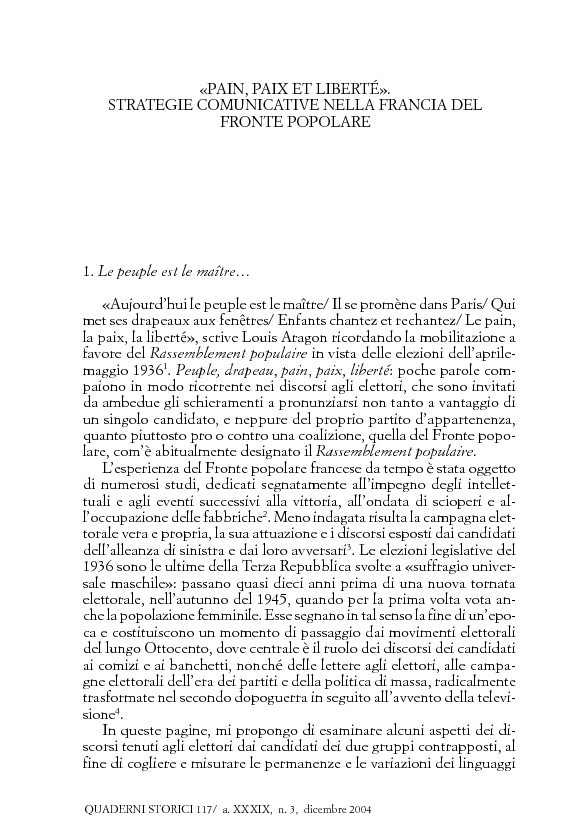