Marked and widening differences in unemployment and non-employment rates across Italian regions can be reduced by allowing two re-equilibrating factors to operate. The first is wage adjustment. If unemployment is higher in one region than another, wages in the highunemployment region decline vis-à-vis wages in the low-unemployment region. This attracts investment, which leads to more jobs in areas of high unemployment. The second re-equilibrating factor is regional labour mobility. As the promotion of local development is relatively slow, the reduction of differentials in unemployment rates typically involves also some outward migration, which may well be just temporary. As soon as unemployment differentials disappear, migrants tend to go back to the original area of residence. In Italy, these two re-equilibrating factors are only partly allowed to operate at the regional level. Still rather centralised wage setting institutions prevent the emergence of significant regional wage differentials. At the same time, a number of factors - including state transfers to the high-unemployment areas - reduce the pressure to migrate. Persistently high unemployment in the South is also associated with low participation rates and a deterioration of the environment in which firms have to operate. The rule of law is poorly enforced due also to the development of a sizeable informal sector. Moreover, the state administration - whose ranks are often artificially inflated as state sector jobs are typically a hidden transfer to high unemployment regions - is highly inefficient. Frequently the public sector pays more than the private sector (at least in terms of entry wages) and provides job security, while tolerating shirking, moonlighting and low productivity. If it is difficult to get a public sector job when already employed in the private sector, this encourages "wait-unemployment" while people (sometimes the most educated people) queue for public sector jobs to become vacant. Thus individuals' wage aspirations are relatively high in spite of high unemployment. Hence improvements in labour demand conditions, e.g. through a widening of interregional wage differentials, may by themselves not be sufficient to absorb long-term unemployment and to increase participation significantly in these regions. In order to move the Mezzogiorno away from the high-unemployment low-participation equilibria in which it is trapped, it seems necessary to act on both the demand and the supply side. On the demand side, it is necessary to pursue greater decentralisation in collective bargaining, as wages should be allowed to vary across regions so as to reflect more closely the differences in labour productivity. Decentralisation in pay determination should extend to the public administration, and be accompanied by the introduction of incentives for higher productivity and hiring procedures which discourage queuing. On the supply side, the task is to transform along welfare-to-work principles the cash transfers provided to non-employed individuals in these regions. A key requirement for this is to have unemployment benefits, rather than other instruments (e.g., early retirement and invalidity pensions) which merely encourage non-participation in the labour market rather than supporting job search. 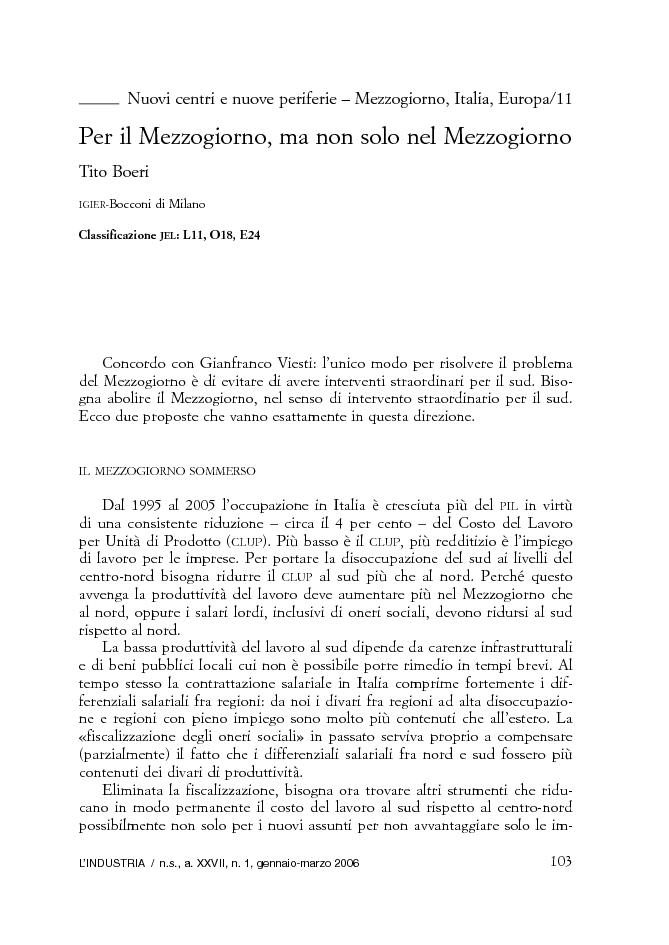