This study analyses some measures of differential taxation introduced by the 2007 Finance Act in favour of the Mezzogiorno, in order to highlight their real scope of operations and some emerging critical profiles. These measures concern "a differential tax wedge for the South of Italy", "stabilization of tax credit for investments until 2013" and "testing of Urban Tax-Free Zones". Such measures occurred after a serious slowdown of overall incentives provided in favour of the Mezzogiorno, which began from 2003 and, especially with reference to tax credit, under law 388/2000, art. 8, replaced by the new tax credit of 2007 Finance Act, was characterized by a stop-and-go trend of allocations, jeopardizing finally the certainty and quickness of the intervention. About one year after the passing of these tax measures, nonetheless their effectiveness is still suspended, in some cases because of not implemented Community authorization procedures, in others because of a not finalized carrying out of rules. Furthermore, their extent, also for some corrections that have taken place for overcoming certain Community restrictions, for the entry into force of a new Community regulation on so-called "de minimis" aids, and for alterations provided for by subsequent provisions and, finally, by the 2008 Finance Bill, today seems very reduced in comparison to the expectations resulting from rules' original formulation. 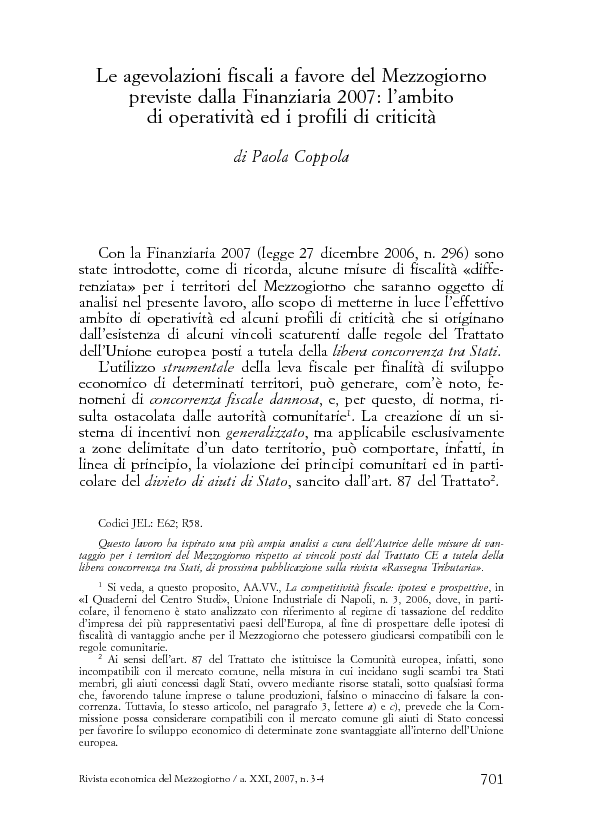