In this paper I will argue in favor of shifting from the conventional model – still largely practiced – of aesthetics as (a theory about the) experience of (something), to a new one, an approach in which aesthetics becomes an inquiry about the experience-with. To this end, I will closely and almost exclusively dialogue with a recent book, Estetica e natura umana. La mente estesa tra percezione, emozione ed espressione [«Aesthetics and the Human Nature. The Extended Mind between Perception, Emotion and Expression»] by Giovanni Matteucci. The with-y perceptual modality proposed here – that I suggest to name also “haptic approachµ – entails that the aesthetic perception corresponds to extended mind and, conversely, that extended mind is always aesthetic, because it posits a with-y, that is, participative, implicative and interdependent perceptual modality. Aesthetic/extended mind is narrative and not explicative; it is not situated at the center (of perception, of life, of the world) but dis-located and diffused. This largely differs from the common idea of the interiority of ego cogito and the neuroscientific intracranial brain that produces explanations. While, on the one hand, I agree with many of the points raised by Matteucci, on the other hand I try to further stress some of the consequences that stem from re-thinking the philosophical practice and, in particular, Aesthetics as a theoretical discipline. I suggest opting for a new disposition, turning aesthetics itself from a discipline of «purely rational» argumentations to a descriptive field, where examples and narrations are gathered and in which a «sympathy» between philosophy and art resonates. 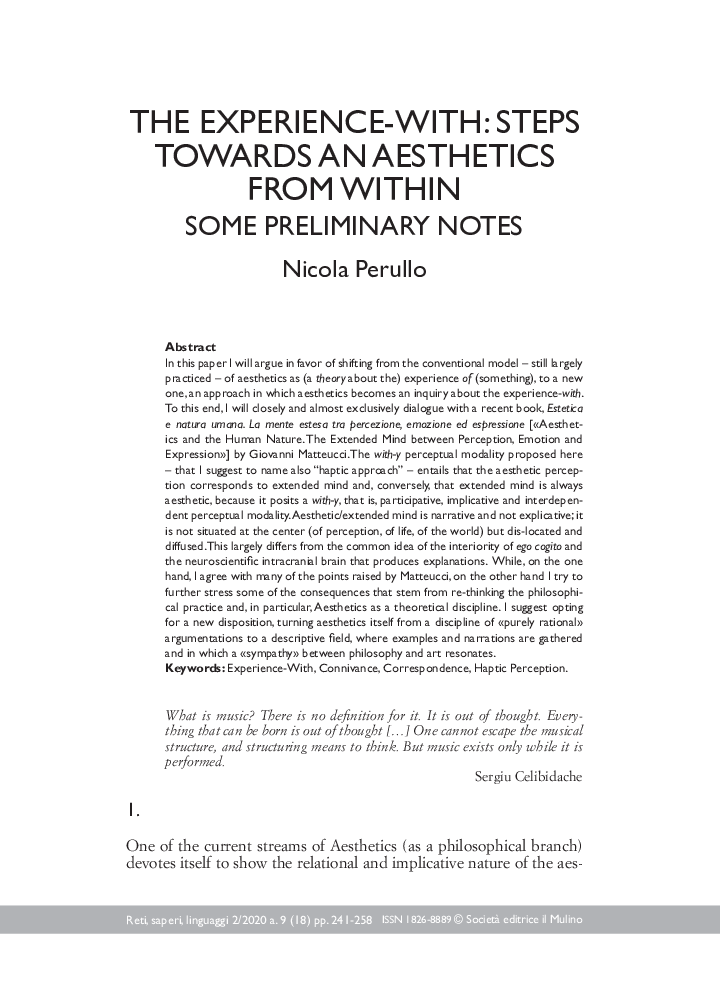