The ceremonial statue and the improvised «shacks» in which a quarter of the world’s population now live mark what Stuart Hall called the «limit cases» of whiteness’s racializing hierarchy in the present conjuncture. Whiteness is not a monolithic form. It is fissured, fractured and fragmented, always trying to form a statue. Let’s try to work in these «cracks» of whiteness. In this essay, I appropriate the multi-screen format of Ghanaian-British artist John Akomfrah to delineate the limits of, and to find the cracks within, the infrastructures of whiteness. There will be one «screen» for white supremacy in the United States, where I live; one for the British colonial legacy with which I grew up; and one for Palestine, where my father grew up. The first screen sees the events in Charlottesville around the 2017 «Unite the Right» rally to defend the statue of Confederate general Robert E. Lee as an articulation of whiteness is a statue and the state. The second screen looks at Rhodes Must Fall in South Africa as an intersection of protests against the continuing dispossession of the majority since the fall of apartheid; the decolonial war of statues; and the world of «shacks», or informal housing where most Black South Africans still live. The third screen looks at Palestinian photojournalism of Gaza’s Great March of Return in 2018 as a temporary but telling instance of the capacity of the dispossessed to decolonize an overturn the world of statues. 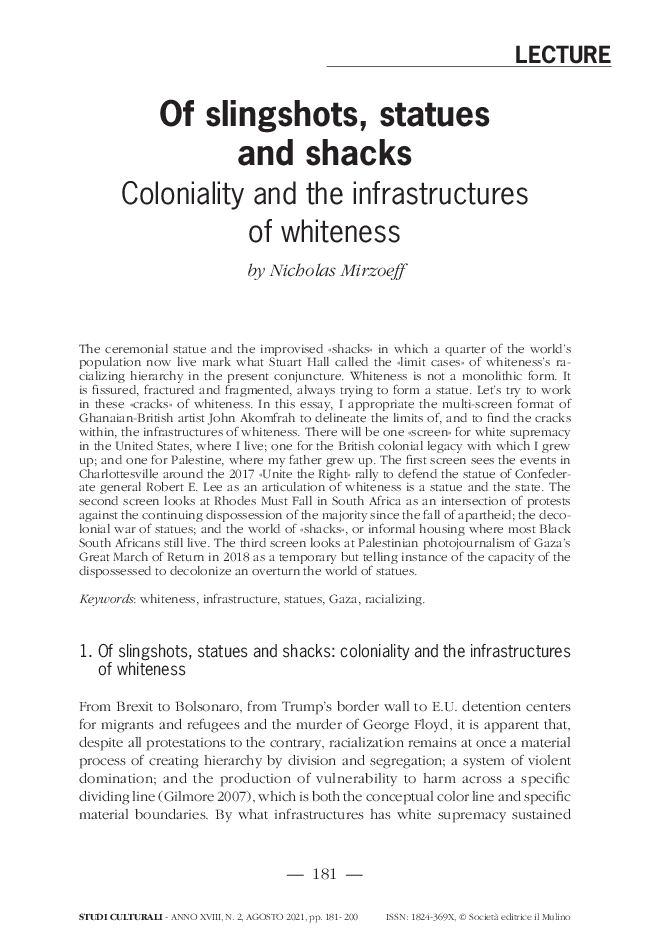