The article examines the use of visual rhetoric, i.e. the translation of literary images, activated in the mind of artists and readers by the reading of texts, and by them then translated into mental images, or into representations given through other artistic media. Aesthetic representation, often thought to be a neutral temple of Truth, devoted to atemporal and universal values such as Beauty and Goodness, reveals in Othello its epistemic limits: far from being a privileged vehicle for final cognition, it is rather a laden cognitive mechanism like many others. The article aims to show that it is limited, as all forms of knowledge are, by its own rhetoric, in this case a visual one, invalidated by the eristic aim, the ideological appropriative moves, it entails. Aesthetic representation is thus uncovered as culture specific, limited to peculiar times and spaces, forbidding its claim to universal value. Othello, in its changing visual culture - Othello is, as the needs dictate, the Moor enacted by white actors, the Arab, the Subsaharan, according to cultural and ideological imperatives - witnesses the birth of discourses of race and discrimination and provides an extraordinary example of these dynamics and of Shakespeare's avant la lettre deconstruction of racial typologizations which had, by then, started to appear (and continue to reappear), in particular against the «other»: the Black, the Jew, and the Muslim. 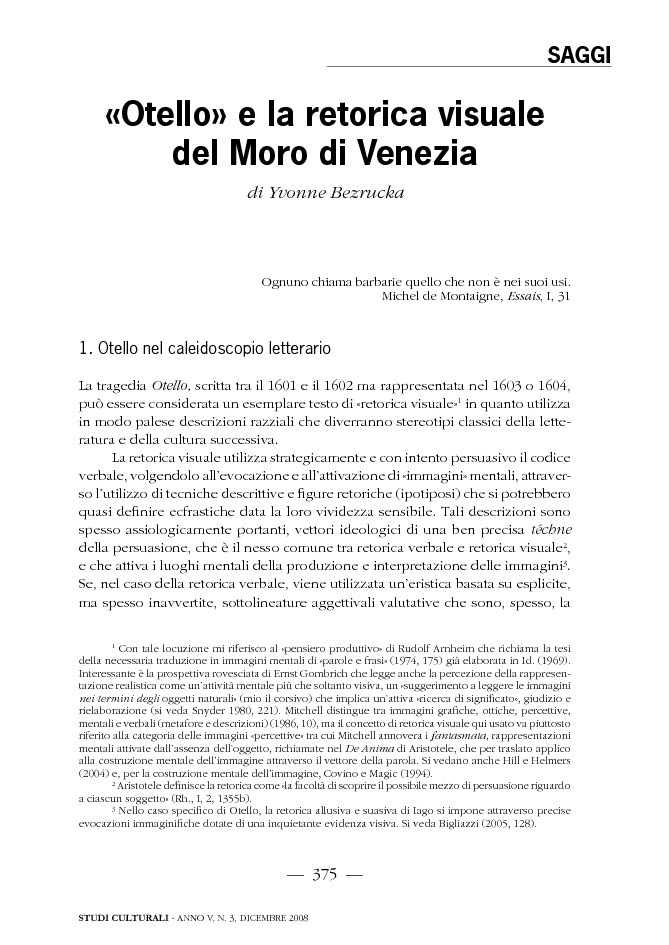