The article discusses what the concepts of meaning, action and structure mean in "cultural studies" by addressing criticism levelled at "cultural studies" scholarship in Finland. It is acknowledged that meaning is a central concept in "cultural studies", but that does not mean that action or actors are forgotten. Rather, attention is more focused on the culturally shared structures of meaning as the framework in which different actors conceive of their own attitudes and identities. Thus the main focus is not on individual coping strategies but on how these strategies represent groups and subcultures. In addition, one studies the structural and cultural conditions of action as a means to analyze how subject positions evolve and change. As to the metaphoric concept of structure, from the actor's point of view it is used to refer to the conditions of existence or, more commonly, to the external prerequisites of action. On the other hand, if we are looking at social structures as such, they represent institutionalized action. In other words, the different parties of the institution adhere to stable practices, whose routine expectations coordinate the mutual interaction of the actors. What then causes the structures or discursive formations to change is a complex and empirical question. Generally speaking changes in living conditions probably have a way of making people question things they have previously considered self-evident. Questioning the old viewpoints and introducing new elements into the discussion may also have a significant effect, if they are able to get enough attention and cause political movement. It is also characteristic of "cultural studies" scholarship to do case analyses and thus study the big in the small. For instance texts have not been considered to be mere descriptions of the state of things or reflections of the thinking of their writers, but also as forums for displaying the dominant forms of routines and reflexivity, and battlefields of hegemonic discourses. 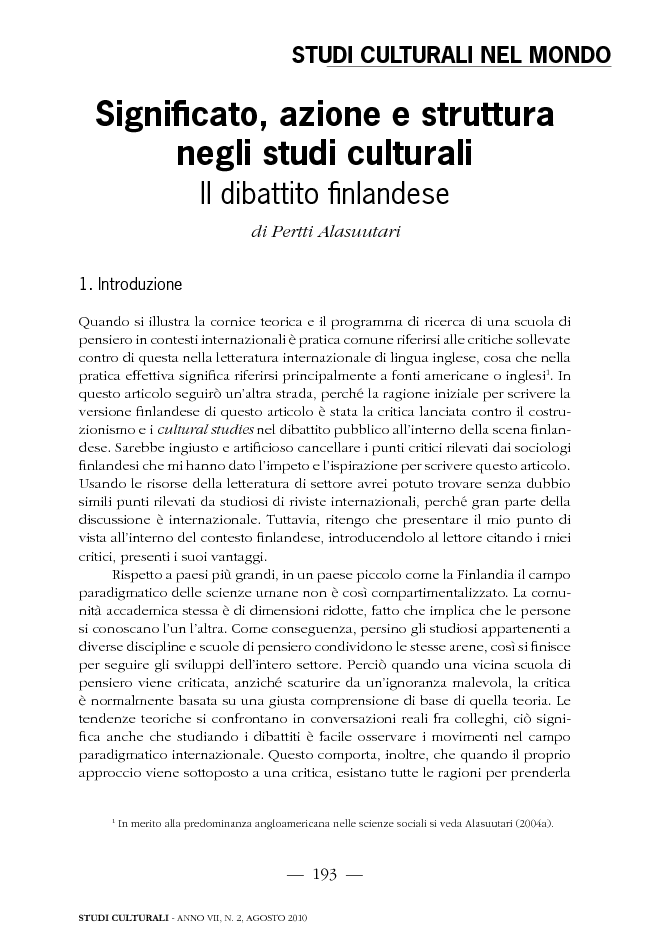