Stemming from an analysis of the historical resonances of Carla Lonzi's resignation from the art world, this article interrogates the theoretical and political meanings of resonance as a practice of consciousness, but also as a technological operation bound to the editing of "Autoritratto". The first part of the essay looks at the question of «the myth of cultural proposition» which Lonzi developed in relation to art criticism first, and feminist writing and practice later. The second part discusses the significance of recording in relation to the inscription of the voice into the text. The third part analyses, from a psychoanalytical point of view, the symbolic meanings of the interviews montage. With regard to the writing of history, recording was perceived by Lonzi as a strategy «to find a page which was not a written page». Thus, the tape recorder was not so much a medium to reproduce the authenticity of reality, as a means to write authentically. Recording drastically changed the mode in which Lonzi (the art critic) made herself present to the artists. On the one hand, the use of the tape recorder divested Lonzi of her authority as an art critic, by deconstructing the paternalist relationship between artist and critic. On the other, the interviews montage disowned the artists of their mythical role, thus deconstructing the relationship between artist and spectator. Finally, the essay ends with a proposition: whereas Lonzi did not acknowledge «feminist art», this should not represent a historical lack, but a trigger addressing a difference resonating like an invitation to turn creativity into feminist practice. 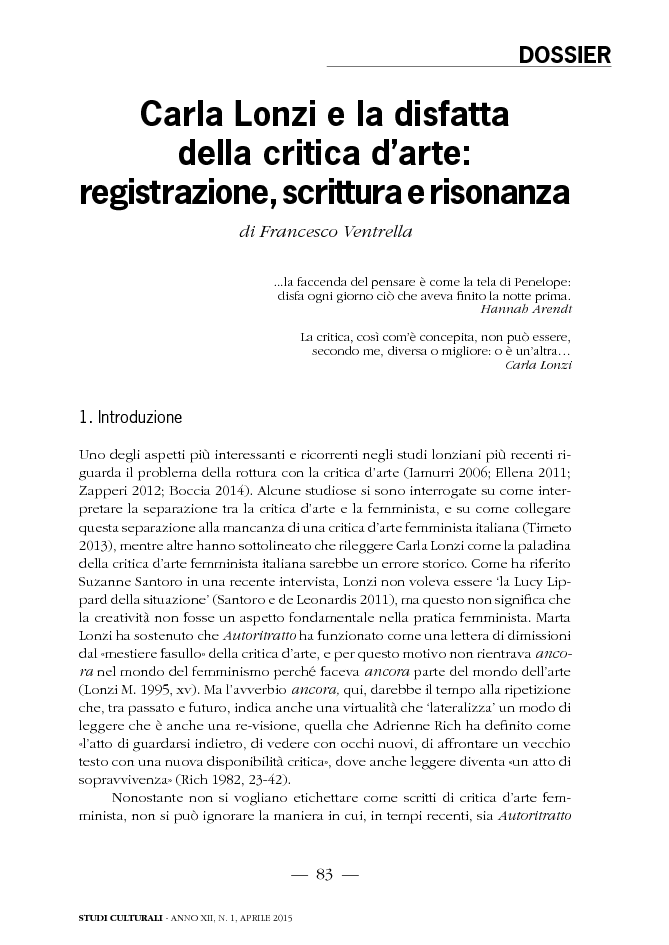