This article analyses how post-fascist Italy faced the death of over 260.000 citizens during World War II. In the aftermath of earlier conflicts, the mourning of fallen soldiers determined the birth of rich and varied rituals through which the sacrifice of many individuals was honoured: the survivors were reassured as patriotic rituals strengthened collective ties and established, through an elaborate symbolism, tighter connections between the individual and the State. In fact it was the State, mainly through the Army, that traditionally took care of rendering the due homage to those citizens that fell to uphold national ideals. After the World War II the Italian State went through a dramatic crisis, the military and their cultural code lost credibility and prestige, allowing associations, movements of various nature, and of course the rapidly developing political parties, to gain a growing influence in the business of mourning citizens that died during the conflict. Free associations that developed out of a lively civil society, as well as families, confronted the State's claim to govern the rituals of grief and mourning. The power struggle that ensued between State, parties and movements, and families, determined an evolution in the way war - and death in war - were perceived and represented, leading to a crisis of conventional patriotic rituals and ideals. In some respects such an evolution reflected the particular nature of a conflict that had overturned the traditional outlook on war; from a different point of view it is also possible to conclude that the different relationship that was developing between State, civil society and families with regards to the cult of the dead was anticipating the great social and cultural transformations that came about since the 60's, leading to the crisis of the modern Nation-State and the decline of its apparatus of rituals and symbols, as well as of its ideology, including the classical ideal of "pro patria mori". 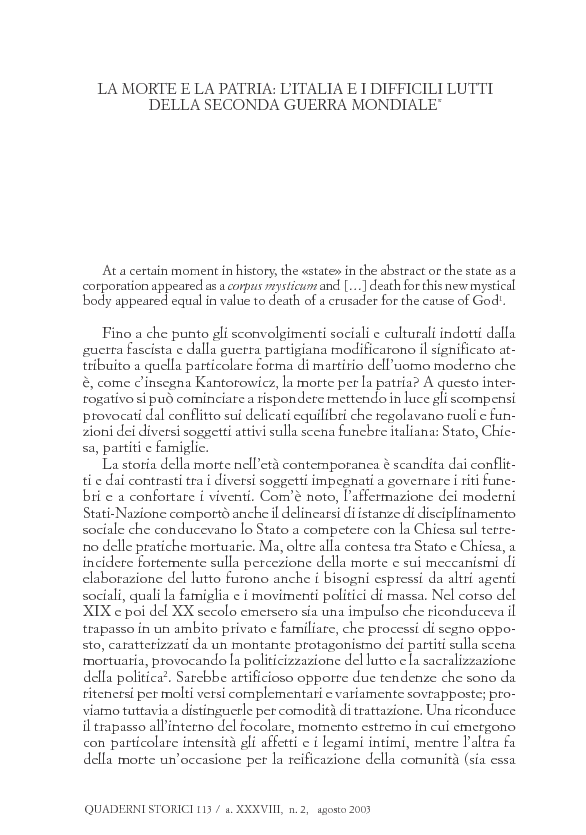