Over the Ancien Régime’s long duration, private secretaries were the main workforce in the entourages of powerful men. Present in all the places of power, the tasks they accomplished on behalf of their patrons formed the very substance of political action, from ordinary administrative duties to interventions made necessary by ongoing events. Taking their place among other servants, they had no protected status, and were bound by unconditional obedience to their master. This article focuses on the social relationship formed through the collaborative work of master and secretary. What advantage did a patron glean from employing a private secretary as opposed, or in addition to, other types of personnel? How did private secretaries use their jobs? In a first section, we will evaluate the presence of private secretaries in the places of power all throughout the Ancien Régime. We will also attempt to explain the relative invisibility of this workforce both in the society and the historiography of the time. Then we will present broad hypotheses to explain the enduring use of secretaries by the powerful. In the second section, we will use a case study: that of young Jean-Baptiste Colbert, secretary to Le Tellier, the war secretary during the Fronde crisis. Using Colbert’s story, we will endeavor to show how a secretary’s agency influenced the exercise of power under the Ancien Régime. 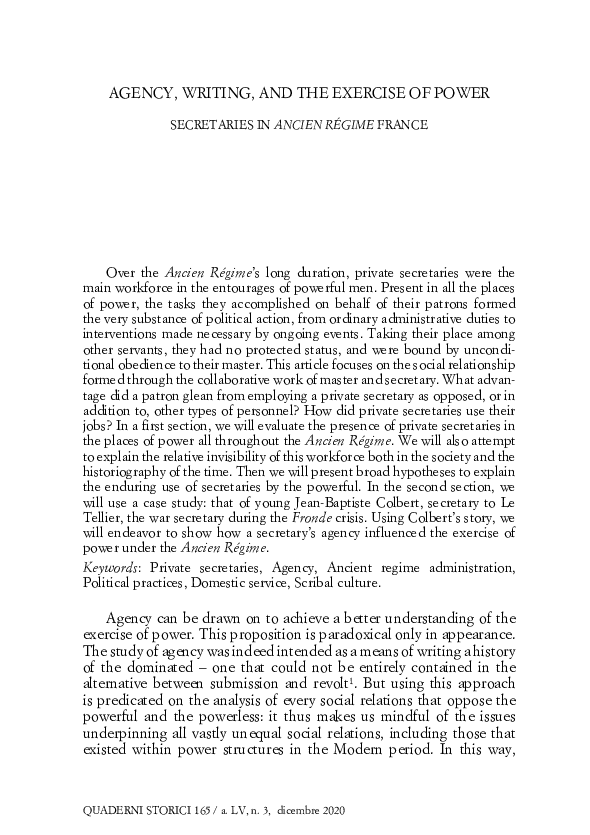