This study concerns the process through which domination is asserted in local communities and, in particular, the way in which territorial possession was secured, preserved and passed on during the "Ancien régime". The study concerns pastures, woods and alpine settlements in the Tanaro Valley in the Ligurian-Piedmontese Alps. These areas were often involved in jurisdictional conflicts among the territorial powers. An analysis of these prosecutions reveals the way in which the Garessio community legitimized its territorial rights between the seventeenth and eighteenth centuries. In comparison with other local communities and the Marquis, Garessio linked the appurtenance of areas to specific ownership actions, governed by the practice of land registration for cultivation, the distribution of fiscal privileges and the exemption of pasture lands from taxation. Above all, however, the event which occurred in 1713 proves that, in the Mursecco ditch area, the tradition of local techniques and uses granted the Tanaro to Garessio together with the old toll. The dispute between Bagnasco and Massimino reveals the procedure through which territorial domination was claimed. Moreover, it also shows the individual possessions and the collective and promiscuous uses which the two communities practiced in these areas. In any case, the border situation was the result of the manipulation of land possession, exploitation and transmission rules among the individuals living and working in this area. The reformulation of rural bans and the renewal of rules regarding the exploitation of common property were enacted in order to safeguard the natives' rights to use environmental resources. 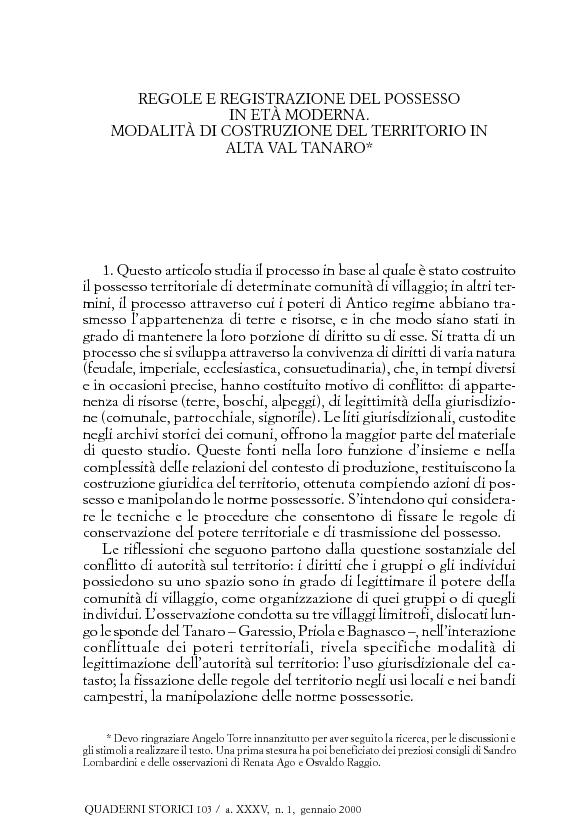