The archive of Turpan (Chinese Tulufan) in the late Qing (1877-1912) attests to unlikely stories of cultural exchange within the lowest levels of the provincial administration of Xinjiang (East Turkestan). During this period, the region of Xinjiang and its Turkic-speaking Muslim majority were integrated into China proper in a new provincial system. Archival documents from this period have been published as photoreproductions and in digital form, allowing unprecedented access to day-to-day life in this multicultural, multilingual society through records in Chinese and in Chaghatay, a Central Asian literary language. This article explores surveys of land and recently uncovered draft notebooks recording grain tax and relief activities to understand how Turpan was made knowable, and thus legible to Chinese authorities. By placing these Turkic-language records into dialogue with their published Chinese-language final versions, we can see how economic «facts» traveled through the porous membrane of translation. This article contextualizes these documents and the people and practices that produced them in order to consider why – in contrast to texts from other parts of the archive – these surveys and notebooks succeed not only in crafting the appearance of accuracy, but evidently in reflecting the socioeconomic realities on the ground. It argues that local Turkic Muslim elites embraced the land survey and grain relief systems for their ability to provide tangible benefits and to maintain their positions in society. 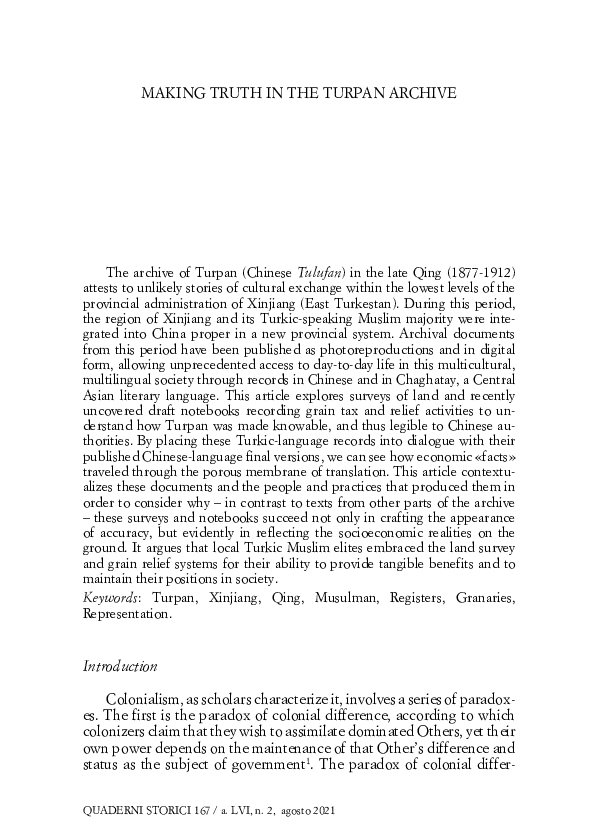