The article investigates the patterns of geographical and social mobility which characterise the experience of this under-investigated occupational group in a period in which its status was enhanced by recent achievements in military surgery and anatomy, and by the new role surgeons acquired in hospitals, in the armies, in the service of the sovereign's household and as municipal "surgeons of the poor". The depositions of 89 shopmasters recorded during the visitation of 1695 provide the starting point for the analysis: the statements can be seen as a sort of self-presentation of the practitioner, they include precious biographical detail on the stages of his career and reveal the features of his professional experience he regards as evidence of credibility and good reputation. The element which is systematically stressed is the territorial identity of the shop, the duration and continuity of the practice not just in the same city but in the same neighbourhood. This emphasis on stability contrasts with the origin of surgeons, at least half of whom are foreigners who have moved to the city, in most cases, in youth. Origins, however, do not play a great part in the depositions and more generally in the new life of surgeons, it is the new identity of "surgeon in Turin" which is stressed and the roots taken in the new environment which count more than any original loyalty. It is argued that studies of migration have paid disproportionate attention to the persistence of original ties in the new reality and failed to recognize that severing past relationships and the creation of new bonds are a crucial component of the migrant's experience. In the case of surgeons, it is the years of work "with" or "for" other surgeons, precedent to the opening of an independent shop, which offer the greatest opportunities to redefine chances of social advance and professional achievement. Youth and the first steps into a career are therefore portrayed as a dynamic, and often subversive, phase of individual initiative rather than an expression of family strategies. In this respect the experience of migrants to towns is not much different from that of young natives: biographical reconstitutions show that within town too, the "migration" of the youth to a different neighbourhood and into a new social and family network was often the precondition of the surgeon's success. 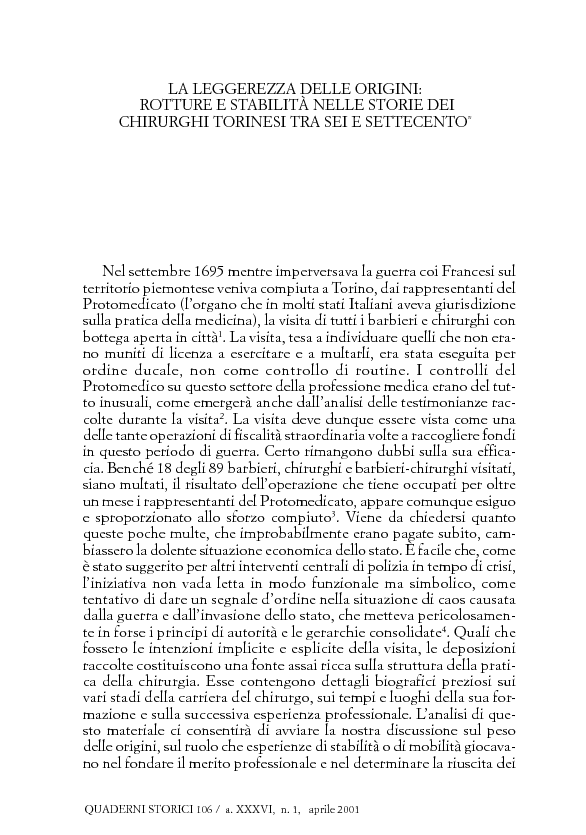