From the standpoint of private law theory, interest in the "commons" lies in their ability to disrupt the modern public/private-law divide. Here I discuss one of the most sophisticated – and contested – reactions to the modern systematisation and enactment of the divide through codification. In 1889, Otto von Gierke published Die soziale Aufgabe des Privatrechts. This text is a precious source for those seeking a possible legal solution to the logical impossibility of dealing with legal entities other than individuals within the framework of modern law. Gierke’s text is a landmark in pluralist legal theory and in the subversive strand of opposition to the growing hegemony considering subjective rights as the cornerstone of modern private law. Without overlooking the internal contradictions and ambiguous legacy related to the organicist and ethnocentric lines of thought running through the text, I will consider Die soziale Aufgabe – and the doctrinal debate that it both drew from and inspired – first and foremost as an example of internal critique of what I refer to as "modern topology". If the public-private divide is consistent only insofar as "individuals" (whether private or public) are its fundamental unit of measure, Gierke, on the contrary, envisions a legal scenario in which "social groups" take the forefront. This theoretical move is unique in that it places a "social" dimension (which could equally be read as "collective", "cooperative", "common", or "communitarian") at the very core of private law, thus running directly counter to the dictates of the public-private divide. Gierke’s soziale Aufgabe is seminal in the theoretical debate in private law in that it sets the premises for an ongoing European conversation on the limits of private law, on its allegedly inescapable relationship with economics, and on the potential "socialisation" or "functionalisation" of the pillars of private law (property, contracts, and torts). The "social" aspect of private law provides not only a means for overcoming the private-public divide (and for restoring the "civil" character of "private" law) but also a means by which "collective entities" can reach the legal threshold without necessarily being translated into individual legal persons. The legacy of Gierke’s text is alive in Hugo Sinzheimer’s concept of law’s soziale Selbstbestimmung (1916), in Emilio Betti’s reading of the contract’s consideration as the socio-economical function of the negozio (Teoria generale del negozio giuridico, 1943), and in the debate over Drittwirkung. My aim is to offer a historical and theoretical reframing of this legal conversation against the background of the legal theory of the commons. 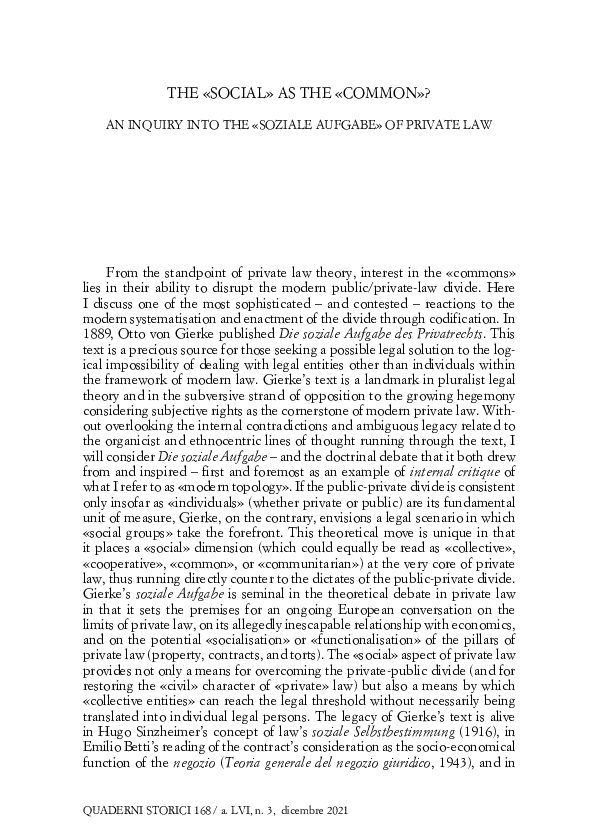