The encounter between missionary orders and indigenous religions in the New World opened dialogic spaces among different religions. In New Spain, this process invested every aspect of life, transforming daily practices (both individual and collective) and reorganizing spaces (both private and public). Within the extirpation of idolatry, missionary orders – and, among them, the Franciscans played a pivotal role – had to struggle against different cosmological beliefs, but also against embodied practices in relation with «sacred matter». This paper observes the de-materialization of indigenous religion in missionary efforts to extirpate idolatry. The article will focus on material representations of Mesoamerican extra-human beings connected to the aquatic realm, interpreted as polytheistic water gods by Franciscan ethnographers. By deconstructing a theistic interpretation of Mesoamerican religion, I will try to reveal the plastic nature of indigenous extra-human beings, embedded in different kinds of bodies: statues, replicas of mountains, places within the landscape, ritual impersonators, priests, and even pictographic images were largely recognizable as dressed in «diagnostic insignias» made of plants, parts of animal bodies, minerals, etc. 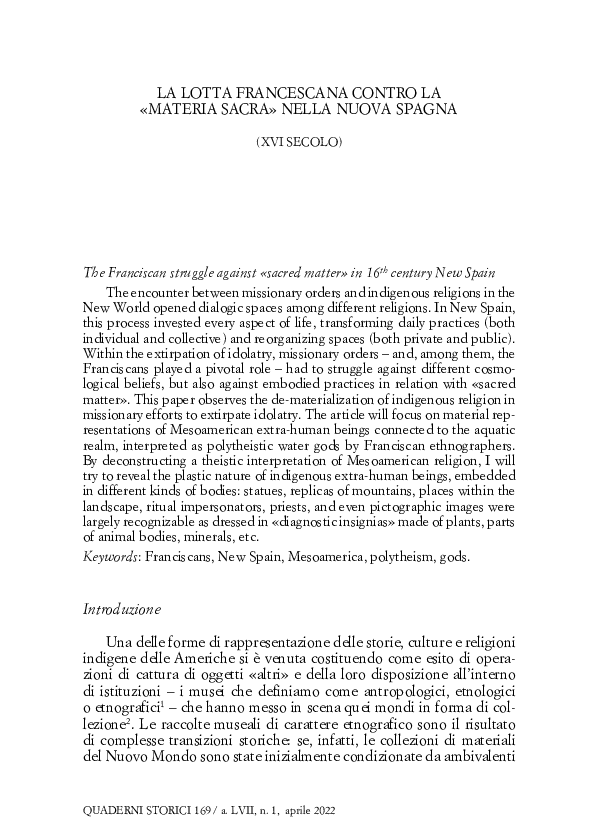