The article consists of two parts. Firstly, it attempts a comparative investigation of what may be seen as a strong tension holding between prevailing social conceptions and widespread practical experiences. Such a tension is an heritage of the Great Revolution's electoral tradition, and may be found both in France and in the old Italian States. On one side, then, we have social conceptions criticising "professions de foi" and electoral speeches for being mere "candidates' party dresses". On the other, we have practices reflecting a widespread use by the actors taking part in the apprentissage process of representative mechanisms based on a democratic or "capacitaire" and "cénsitaire" idea. Secondly, it focuses on languages, paying special attention to the Italian case. Here the main issue is the acknowledgement of some common traits in the structure of speeches and arguments, even when they belong to different contexts and communicative typologies. Namely, these are: a) a three-folded narrative scheme, corresponding to the three-folded role played by the member of parliament as representative of the Nation, of the State and of the local community; b) an overlapping between the property of being "the most capable" and that of being a "patriot"; c) the idea of independence war as developing in the framework of a general national harmony. Thus, from the viewpoint of languages and symbolic structures, the electoral events taking place in Italian States between 1848 and 1849 deserve to be studied at least as much as the first Italian elections. They are in fact a sort of "national electoral discourse" workshop, in which rhetorical schemes and images which will be central in unified Italy's electoral history are investigated. 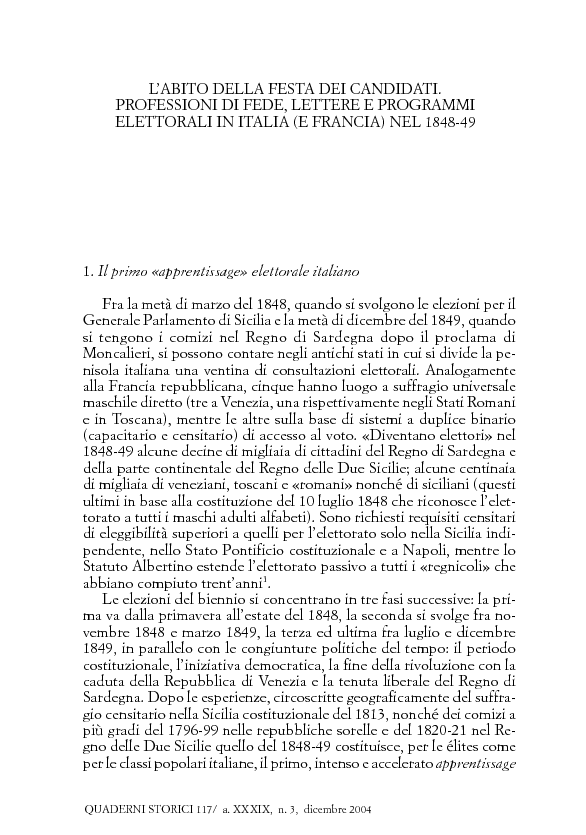