In 1560 the Dukedom of Tuscany ordered an annual and unilateral visit to the frontiers. The execution was delegated to the Community, whose representatives, escorted by the local judge (acting as a guarantee) and by some senior and junior citizens (in order to transmit the memory of the borders from generation to generation), had to run along and observe the portion of border committed to them. From then until 1769, every year Florence will receive a written report with the description of the jurisdictional terms of every border Community. By analysing the Dukedom legislation and the letters by the frontier judges, the visit appears as a political-juridical ritual with the aim to indicate the jurisdiction borders and prevent possible usurpations. The areas of the sovereign prerogatives appear under an unusual light: fluent in the marginal parts, mobile in their extremities, under a constant pressure, capable to redraw their extension. Studied with the Community scale, the visit is loaded with several tensions, due to the ambivalent nature of the areas divided by the frontiers: the lands undoubtly form the sovereign jurisdiction, but at the same time they are compound by goods belonging by several rights (public domains, private properties, long term leases) to the neighbouring populations. In this sense the visit appears like the place where both the dimension of sovranity and the multifarious rights of the State citizens meet and influence each other. 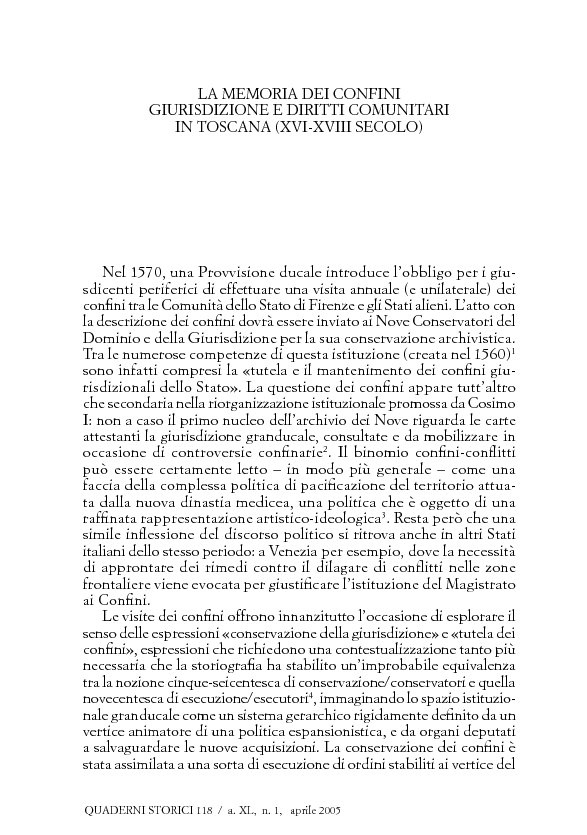