This paper observes how 17th and 18th century marriage, regarded here as the fundamental cell of society, was bound, controlled and conditioned by a myriad of rumours, opinions and criticism born inside the married couple's "entourage". It examines several cases of separation of both aristocrats and commoners and their solutions, reached through extrajudicial ways or discussed before the Roman ecclesiastical court. These cases were reconstructed through private papers and the trial papers of the "Roman Sacra Rota" court. Rumours about the crisis of a marriage would include views on the behaviour that was expected by the spouses, and they would implicitly reflect opinions on the honour of each of them; at the same time, these also illustrated a world of subjects intertwined with everyday life, which were carefully scrutinized although they did not have any immediate relevance to the trial itself. Being able to deal with this stream of news was fundamental for both husband and wife. It is possible to highlight three different spheres in marital conflict and three kinds of information which circulated among these: a conjugal sphere, the one most related to the balance of the couple and to the roles of husband and wife; a domestic sphere, characterized by networks of relatives, neighbours and servants who lived all around the couple; a judgmental sphere, that is, the realm of rumours inside the court. Observing marriage within its network meant knowing the importance of listening, as the ecclesiastical judges, who often admitted rumours beyond the threshold of the legal sphere, knew well. 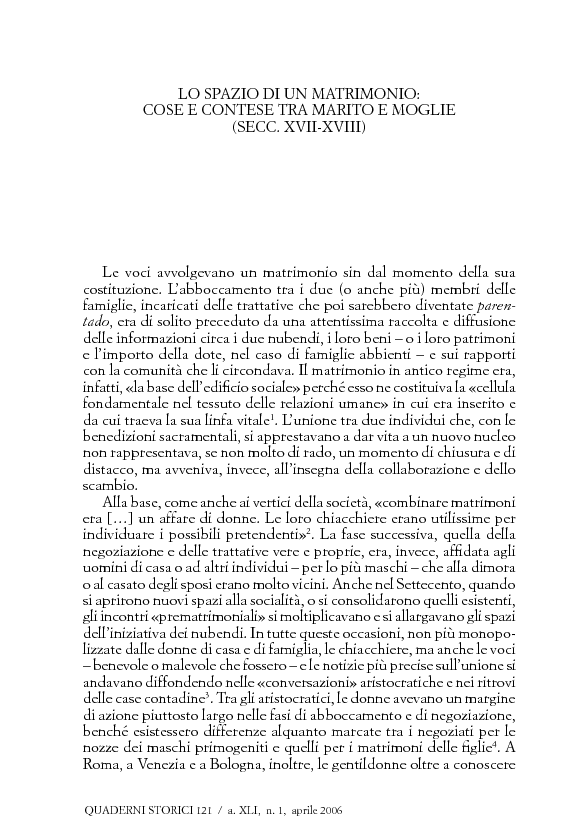