Between the 14th and the 15th centuries, Jewish communities in Sicily had a remarkable demographic, economic, and political weight. Jews represented five per cent of the population: a world of artisans, shopkeepers, entrepreneurs, farmers, and a consolidated group of doctors and intellectuals. The state kept hold - notwithstanding the Franciscan attempts to establish canonical rules of subordination and relative segregation - of the Norman ecumenical agreement that allowed to Judaism the status of "second religion of the State" and gave to Jews full citizenship and civil rights, in particular the freedom of property, within some established limits. There is ample proof of Jews' ownership of - non-Christian - slaves: 2.5 per cent of transactions during 1280-1310; a gap in information in the cycle of the Christian-Greek slave between 1310 and 1360; 2 per cent again during the cycle of Tartars; 10 percent between 1400 and 1440, and 8 per cent between 1440 and 1460, when the Sicilian market for African slaves developed links to the Trans-Saharan routes. Jewish middlemen were particularly active in this last cycle.Jews' ownership was not without opposition from the Church. The presence of slaves in the household, in Talmudic Judaism, required their purification and males' circumcision, which led inevitably to the enlargement of the community, as several cases have shown. For many clergymen, in particular the Lullists, who were emphatically against slavery, conversions of pagan slaves to Christianity or of Jews to Islam should have let to their immediate emancipation. Finally, the role of the middlemen requires exerting authority on slaves, also Christian. This too was opposed. In general, the monarchy upheld slave-owners' rights, refusing to grant freedom to the converts, although allowing, from time to time, the forceful christening of slaves' children born in the house. This conflict, a discreet one, revealed also the ambiguous position of the slave-owners, likely or certain fathers of those children, who, in spite of the moral rules on purity, had developed this habit outside the boundaries of the religious law. 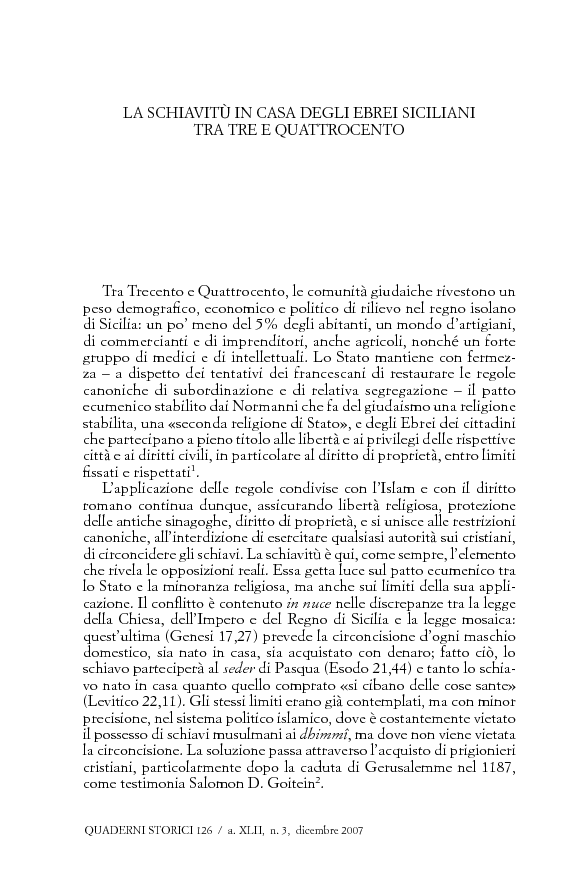