The purpose of this article is to show how the fiscal system could con- struct a territory and more generally to reflect upon the ways of creating institutions in the Old Régime. The analysis shows that the old regime institutions were not simple, but layered in a number of bodies with a considerable configurational power. This work aims to analyse the functioning of intermediate institutions during the early modern period known as «contadi», typical of Spanish Lombardy and born in the second half of the sixteenth century. The duration of these institutions and their adaptability to different contexts is remarkable. We find them much later not only under the Austrian domination, but also under the Savoy, in the territories of the «new purchase» which passed from the State of Milan to the Kingdom of Sardinia in the course of the eighteenth-century wars of succession, to be eliminated only belatedly in the 1770s. In particular, I chose to study the case of Vigevanasco, the smallest among the ten «contadi» of Lombardy. The word «contado» has a twofold meaning: on the one hand it was a space subject to different powers, on the other hand it was an autonomous institution, specialised for collecting taxes from rural communities. To this end, the «contado» was provided with an «estimo», or a fiscal description of its components.The author analyses how the «contado» was profoundly layered by some forces that aimed at becoming «bodies», that is, independent fis- cal entities that led to fragmentation of the institution. This movement was radicalised by the birth of «Egualanza» in 1597, a particular and complex system created to regulate the compensation payments concerning military housing, which became increasingly widespread particularly with the onset of the Thirty Years' War. 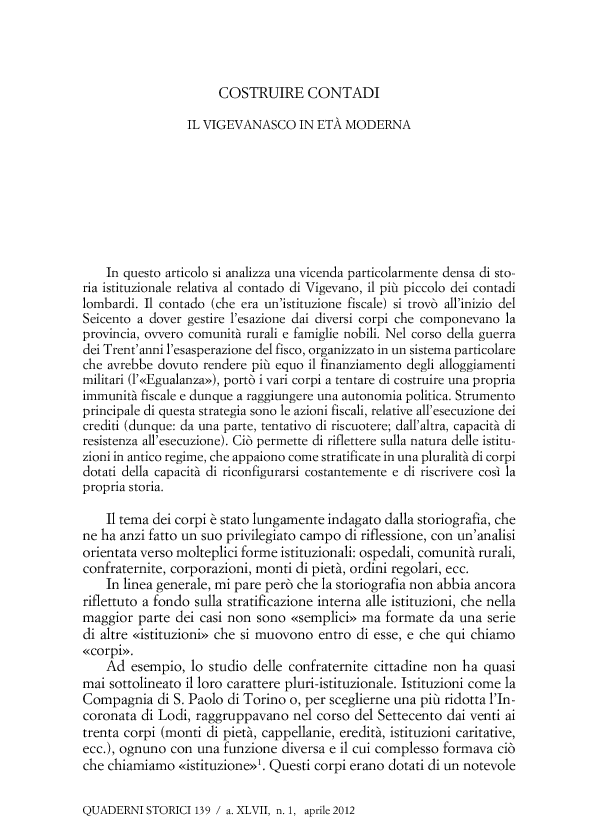