During the Ancien Régime, the professions of lawyer and attorney in France were subject to strong criticism. Bogged down by internal conflicts, these jurists were criticised for practices that did not comply with the code of ethics, which damaged the image that those subject to trial had of these representatives of defence. At the same time, the reformers of the Age of Enlightenment emphasised the severity of the provisions of the criminal ordinance of 1670, and particularly the limitation of the right to defence in criminal matters. Faced with these pitfalls, the members of the Constituent Assembly applied themselves, from the early days of the Revolution, to reforming legal defence as a whole. From 1789, defendants had a counsel who could plead before the criminal court, which was now a public court. At the same time, the Constituents abolished lawyers and attorneys and set up freedom of defence by authorising parties to choose an unofficial defender, an ordinary citizen or a man of law, who would agree to provide legal assistance free of charge. The decade of the revolution has allowed us to measure these radical changes, particularly to assess the continuity and breakdown in the area of defence rights, as well as the fate and behaviour of the new players in legal defence. Between 1789 and 1799, legal practices highlighted the pioneering nature of these reforms, which truly transformed criminal trials. Nevertheless, the French Revolution was far from erasing all the excesses found in the area of defence prior to 1789. In this respect, traditions remained - particularly the presence of jurists - and the fact that they did remain left room for the idea that the legislator had sometimes been too daring in devising legal defence. 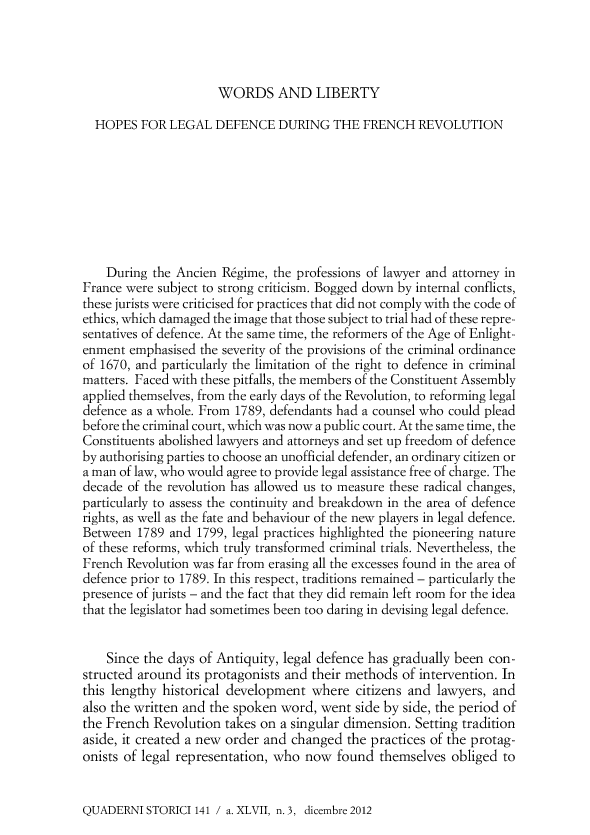