As a former French colony ceded to the British in 1763, Quebec inherited two legal traditions (civil law and Common law). While English criminal law was introduced in 1764, the core of French civil law was reaffirmed in 1774. Implementing such a hybrid regime was not an easy task considering the context: a British colony where the majority of the population was of French origin (the French Canadians or, as they were referred to at the time, simply the Canadians). French-Canadian elites soon began to loudly denounce British judges for what they saw as an Anglicization of French civil law. But what was really going on in the colony's civil courts? How exactly were lawyers, who had to plead on a day-to-day basis before British judges, defending French law tradition? And, most importantly, to what extent did court cases and lawyers' arguments feed debates that were raging in the colonial public sphere at the same time? My research has revealed a simple but significant fact: by the beginning of the 19th century, legal practitioners had abandoned written proceedings in favour of oral submissions as the prime vehicle of persuasion in matters of law, at a time when the dissemination of legal debates still remained very limited within the colony. This situation undoubtedly explains, at least partly, the relative virulence of French-Canadian opposition in the political arena, especially in the Legislative Assembly. More easily relayed by the colony's fledgling press, oral arguments made in the courtroom found their way into the colonial public sphere. However, trial lawyers had very little to do with the public dissemination of the details of court cases, quite unlike the situation in pre-Revolutionary France or even liberal England. Through this investigation of defence practices and their relationship to the public sphere, this article seeks to contribute to a field that has already highlighted the role of lawyers and justice in the social and political activism of the same period. 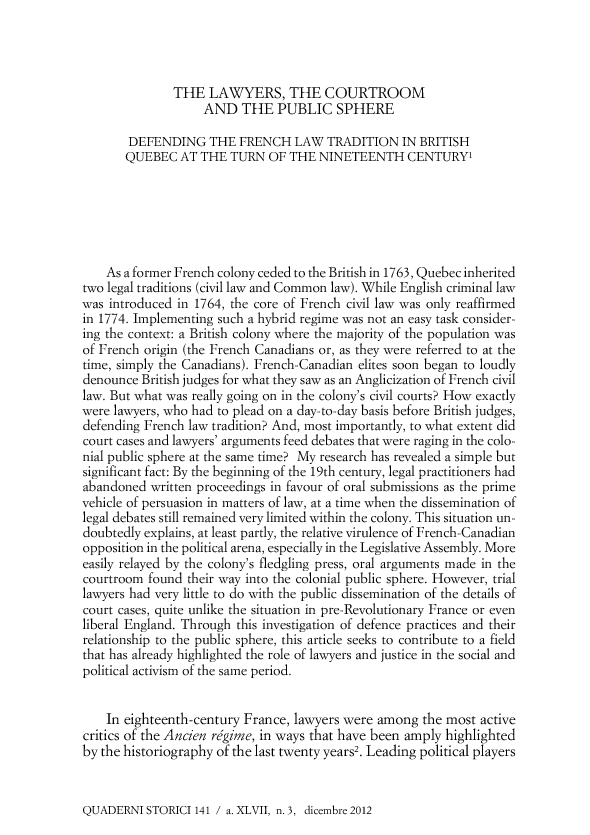