The Italo-Eritreans are children of Italian fathers and Eritrean mothers. The paper discusses why, during the first fifty years of Italian rule in Eritrea, the notion that the child of an Italian father was Italian prevailed among the colonizers and the colonized alike. Even if in different ways, in fact, both the Italians and the Tigrinya (Eritrea's largest ethnic group) predicated children's identity on paternal descent. The paper points out how the colonized played an important role in the shaping of the racial classification of the mixed-race. Italo-Eritrean children were raised as Italian but, paradoxically, their Italian identity was largely a Tigrinya creation, and in particular a creation of Tigrinya mothers. Among Italians, racial prejudice against the mixed race was widespread. At the same time, Italians hold paternal primacy as a pillar of the social and racial order, and thought that fathers had the power to pass their identity on to their children. Contradictory attitudes towards the Italo-Eritreans ensued. The quest for paternity shaped the attitudes of several male colonizers. Colonial paternity could take different connotations. Male colonizers could assert their colonial prerogatives over African women either by abandoning their children, or by caring for them, raising them as fully Italian, and marginalizing the mothers. The paper thus encourages to look at the making of colonizers' masculinity not only in terms of sexuality, but also in terms of paternity. 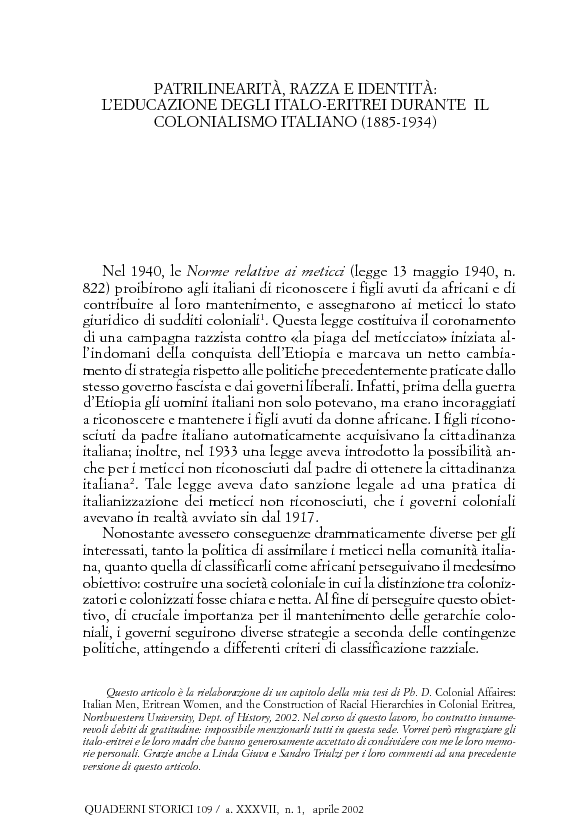