A secular acropolis bisects the city: one is the child of the steel industry and the other is the CIAM grid. Modern and juxtaposed cities. An «Unité d'Habitation», the only child of three parents: a square, a sports filed, a swimming pool, a cultural centre, the unlikely jewel of André Malraux's enlightened policy, and lastly the base of a church. The patrimony is both improbable and authorial, although its author died before it took shape as a whole. A patrimony which had been the middle ground between two opposed notions of modernity, each one with its actors, before becoming what it is: the ones declining and the others still with no future. The scene became the materialisation (the material object) of conflicts, disagreements, and appropriations. An object whose patrimonialization follows a bottom up process develops as the city council changes becoming the slippery ground for new social and cultural identities. It is an acropolis which turns around the documents proving the legitimacy of the memory being reaffirmed. It also opens to material policies and leads to the restoration of works, much more than the mere paper archive which is what makes Firminy the le Corbusier site par excellence. This approach also turns the authorship principle upside down as its architecture, especially the «Unité d'habitation», cannibalises its name while the name itself, which was so awkward, virtually becomes the toponym of the site. A further complication: Firminy witnesses an a priori patrimonialization opening a debate on authenticity, copes, the recognition of material and later immaterial heritage. The debate draws from history, restoration and their many combinations. The essay maintains both the point of views of historian and the restorer while attempting to describe the complex narrative plot without hiding conflicts, the problematic contradictory crossroads made possible by the use of two knowledge sets used in the essay. 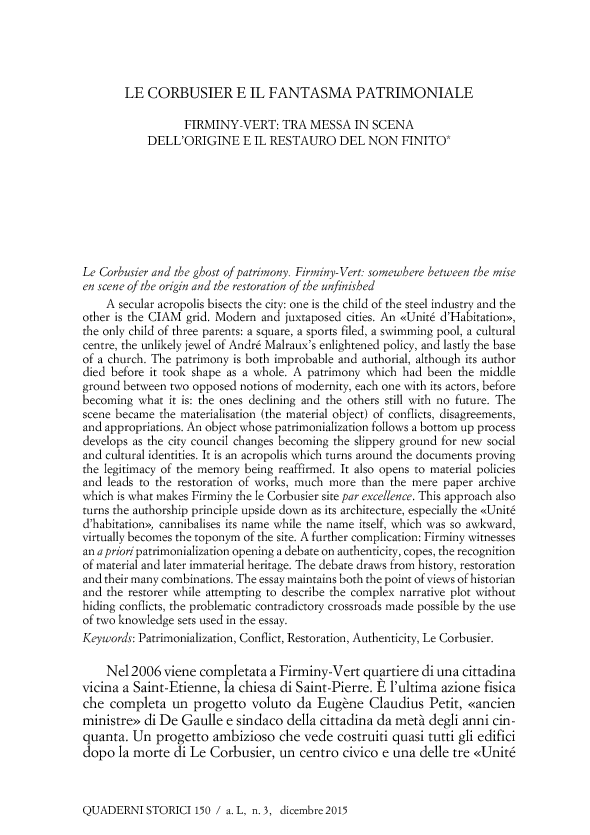