This note gives a brief résumé of research into historical earthquakes in Italy, conducted entirely outside the university setting and beginning in the early 1980s. The research went through various phases with different objectives before focusing in the early 1990s on the "Catalogue of Strong Earthquakes in Italy" from the ancient world until the twentieth century (CFTI). In 2007 this was extended to cover the whole area of the ancient and medieval Mediterranean (up to 15th century). The CFTI was the first alphanumerical historical databank on earthquakes. It is now run by the National Institute of Geophysics and Volcanology (INGV) and since 2007 has been accessible online. From the outset the workgroup that drew up the CFTI (comprised of historians, geophysicists, seismologists, informatics experts and geologists) adopted a multidisciplinary work style which, though not feasible in the world of public institutions, may be achieved in the private sector. The research responded to a technical and scientific need to assess seismic hazards, but the results as a whole went further, bringing to light an almost unknown chapter of social, economic and cultural history. In Italy today, and throughout the world, studies on historical seismology have mushroomed. It ranks as a new discipline, complete with manual/guide (E. GUIDOBONI, J.E. EBEL, "Earthquakes and Tsunamis in the Past: a Guide to Techniques in Historical Sismology", Cambridge 2009). This short outline summarises some of the salient results but especially the problems that have arisen in this multidisciplinary field. 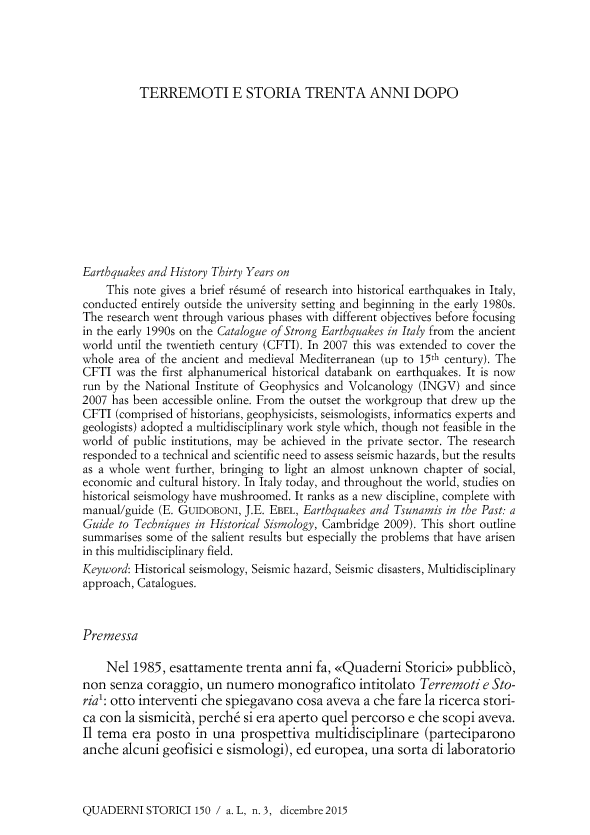