Since antiquity, both naturalistic and supernatural discourses have been propounded in an attempt to explain sudden catastrophic phenomena. Surprisingly, however, prediction was perhaps not a dominant discourse within pre-modern societies. Rather, naturalistic explanations were mostly functional to determining the cause of earthquakes, which was attributed to the disruptive force of one or more of the Empedoclean elements. Prevention, rather than prediction, was the most pressing concern: this included building according to certain norms but also praying to god and his intermediaries for forgiveness. This article explores the way the cult of early modern saints could encompass the power to avert catastrophe by looking at the case of St Filippo Neri, founder of the Counter-Reformation order of the Oratorians. It illustrates how Neri acquired his intercessory power against earthquakes, and how this cult was consolidated through the work of both Neri's acolytes and the special patronage of Pope Benedict XIII (Vincenzo Maria Orsini), who credited the saint with having saved his life during the 1688 earthquake of Benevento. 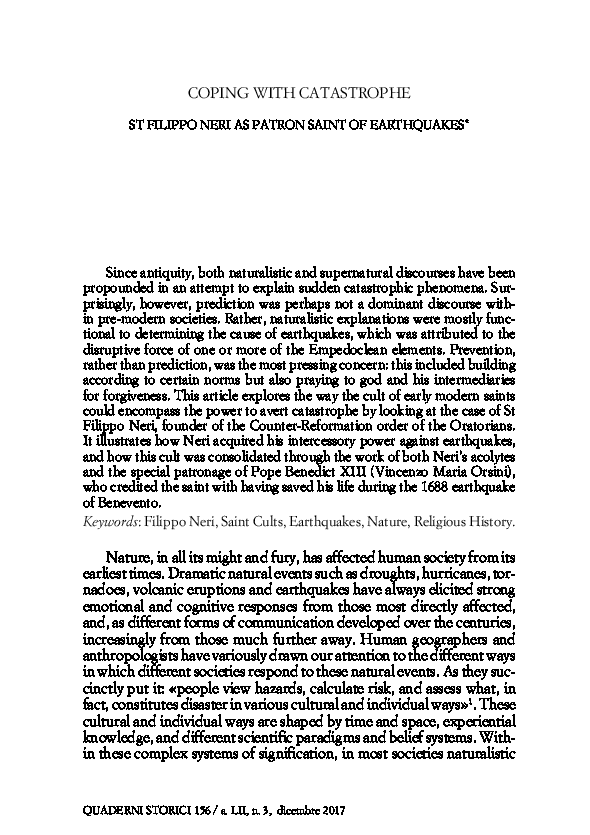