At the beginning of the 20th century, in Italy, the Jesuit Camillo Beccari brought to light a collection of unpublished European documents on the history of Ethiopia from the 16th to the beginning of the 19th century and published them in the collection titled Rerum Aethiopicarum Scriptores Occidentales Inediti (between 1903 and 1917). This has become the essential reference for anyone interested in the missionary phenomenon in Ethiopia, from the Christian kingdom to the modern period. His colossal work of inventory, undertaken in European libraries and archives, reveals almost exhaustively a set of documentation of unpublished European sources for the period from the 16th to the end of the 18th century, thus creating a specific field of Jesuit knowledge on Ethiopia. However, how was this documentation compiled and produced? By following step by step what he was able to do, we have the opportunity to read his work not only in the light of the contents of the documents but also, and especially, in keeping in mind the process that generated them. Approaching it in this way allowed for a shift, and for consideration at the widest possible level, to put the stakes and intentions of his work into perspective. The perspectives highlighted serve to emphasise the fact that the function of «specialist» in holiness, which Beccari occupied in parallel to that of publisher of European sources on Ethiopia, was related and came to shed light on the very contemporary stakes of the Society of Jesus in the face of other orders of the Catholic world. Finally, this work of «descaling» reintegrates this production into a topicality, that of the end of the 19th century, and in particular Italian colonisation and its establishment in the region of the Horn of Africa. This paper is an invitation to read these sources in a different way. 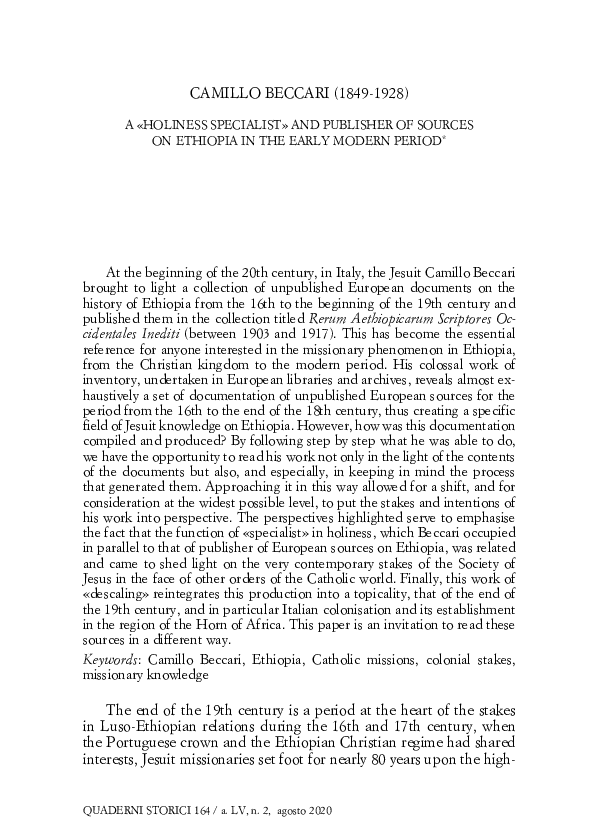