In the nineteenth century, anti-Masonry, or the virulent denunciation of Freemasonry and its supposed grip on society, gradually turned into a veritable doctrine within counter-revolutionary thought and action. The International Anti-Masonic Congress that took place in Trento in 1896, under the high patronage of Pope Leo XIII and the Emperor Francis-Joseph, was an important step in the rise of a transnational anti-Masonic movement. It brought together 1,500 people, including delegates of the existing anti-Masonic associations, nearly 300 newspapers and a consistent group of Catholic prelates. The thousands of telegrams in support of the Congress also testify to its international impact. This «first and grandiose international demonstration against Freemasonry» gave rise to a permanent international organization, the Universal Anti-Masonic Union, which was to become the «single center of all anti-Masonic groups» existing or to come, and whose aim was to fight by any means available a global war against the «Freemason sect». Despite its practical failure, this project is indicative of the transnational and adaptive nature of the counter-revolutionary response to modernity. By focusing on what the Congress itself represented both in terms of organization and communication, we argue that the heralds of the Counter-Revolution were fully aware of the need to adapt their methods of communication and mobilization to a time of rapid cultural change. The discussions that took place during the Congress of Trento regarding the means of action to fight Freemasonry attest to this desire for tactical renewal, but also to the very limits that led to its failure. 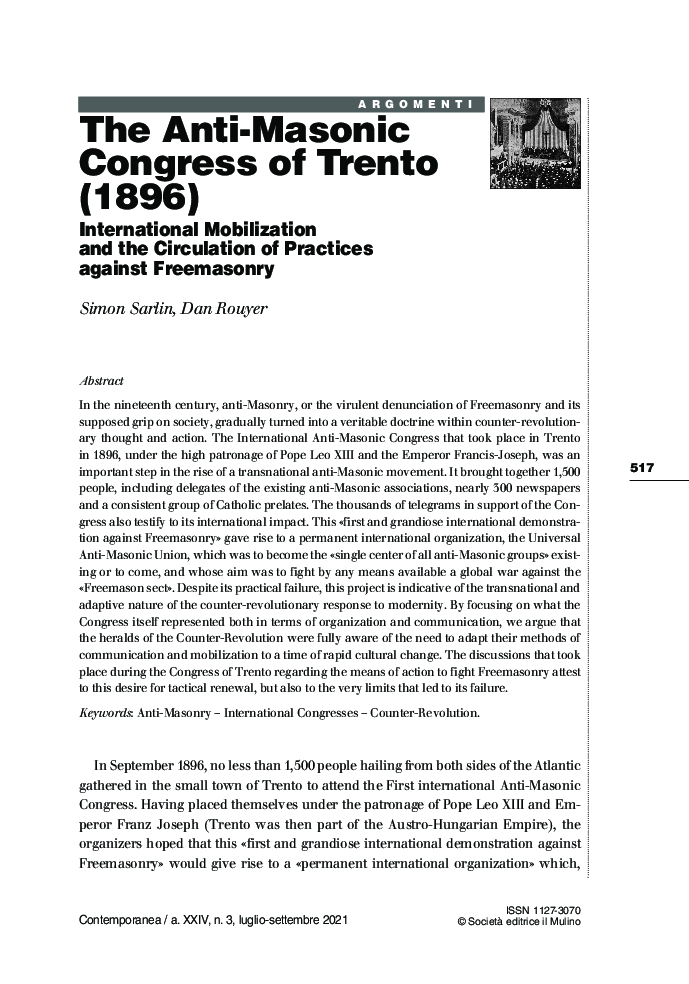