Focussing on key historiographical debates, this essay analyses the development of LGBT+ History and Queer History in the Anglophone world and recent developments in Italian historiography. The first part analyses how Gay and Lesbian History developed in the 1970s with the aim of reclaiming people, stories and battles hidden from mainstream history. LGBT+ historians initially explored how sexuality has been a catalyst for oppression throughout history, and were interested in showing the mechanisms of power in repressing non-conforming sexualities and gender identities. The formation of a gay and lesbian identity and subculture were explained as a product of industrialisation, urbanisation and competitive capitalism. The second part of this essay focus on Queer History. Dissatisfied with a rigid binary between homosexuality and heterosexuality, and with the gender binary that dominated the first phase of LGBT+ History, a fresh historiographical trend emerged in the 1990s. A new generation of historians invited scholars to study the past using a queer lens and challenged the idea that homosexuality and heterosexuality, or even bisexuality, have been the only forms of sexual expression. They have challenged the gender binary of much of Western LGBT+ History and emphasised the importance of seeing both sexuality and gender as fluid. Finally, the third part of this essay shows how important debates present in LGBT+ History and Queer History have been re-elaborated in recent Italian historiography. 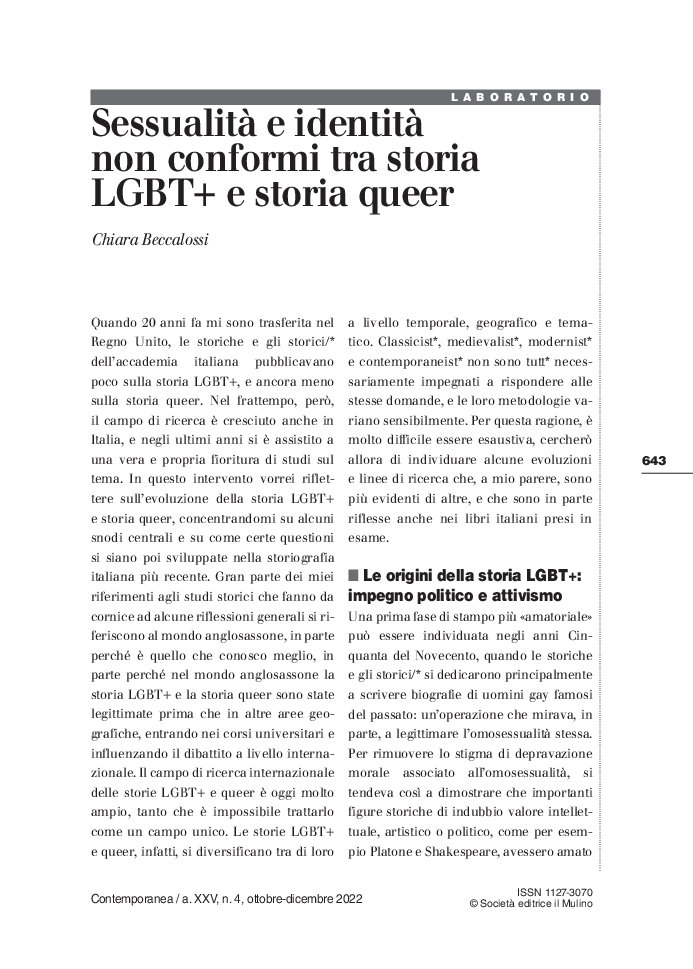