Giovanni Lorenzoni (1873-1944) produced his first studies relating agricolture during a formative period at the Società Umanitaria of Milan, nucleous of the reformist socialism in Lombardia in the first years of 1900. Since 1929 he was charged (also dued to his work in Sicily on Faina Inquiry in the first years of 1900) with the direction of the inquiry on the cultivator property, to carry out on behalf of the newly estabilished Istituto Nazionale di Economia Agraria. It was a wide initiative with the aim of evaluating the phenomenon of a remarkable number of Italian cultivators becaming landowners. They had succeeded in buying many lands after the first world war, both for the increased availability of the agrarian middle class to sell lands dued to the social unrest, and for the earnings coming from emigration or from the prices inflation in the agricoltural sector till 1926. The phenomenon resulted considerable as it concerned about one million ettari of land (5,7% of the national agrarian surface) and 500.000 small cultivators, who got about two ettari each. There was also in different areas a large social and productive transformation of essential parts of the Italian agricolture (including the plain and hilly countries, which had become very valuable), which, it has to be said, occurred in a totally autonomous and spontaneous way, based on the savings or on the debts of the cultivators, without other incentivating aids from banks or from State controlled prices in the land market. Lorenzoni concluded his work in 1938, crossed also by big worries towards the small cultivators - an essential class for the consent to the fascist government -, as after the financial deflation in Italy in 1927 and the serious world crisis afterwards, different newly formed cultivators firms had heavy difficulties: "More work, less consumption, the crisis was faced in this way". This sentence by Lorenzoni, which become famous (as the whole inquiry, very much used in the historical works), comments on the fact that, thank to the consumpion greatest compression and to the highest quantity of work done, the bankruptcies of the small cultivator firms succeeded to be a limited number. The last part of the article relates a discussionon on the data of some censuses about the agricolural firms in Italy between 1930 and 1947. The conclusions of this work is that the two surveyings are not methodologically comparable and that the cultivators pression on the Italian lands during Fascism expressed itself in the wide recourse to the rent and to the colonic contract. 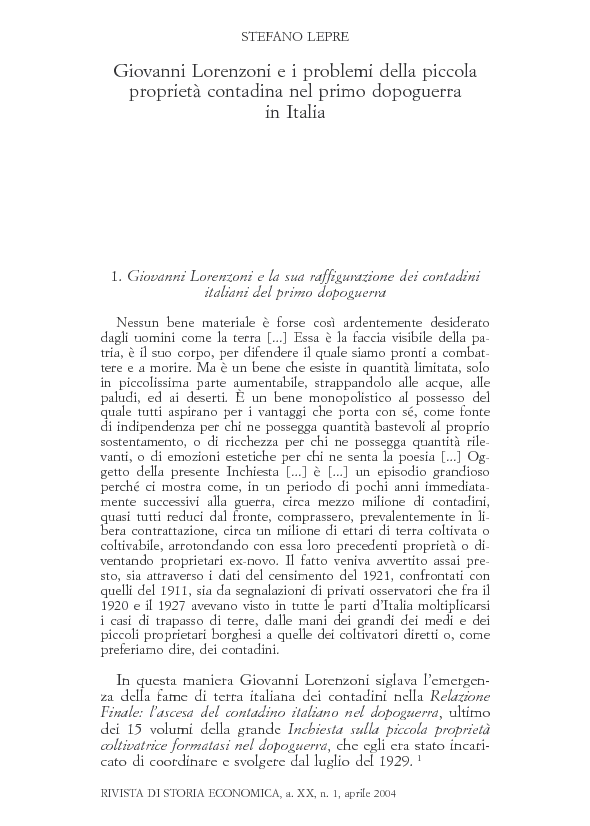