Einaudi's contributions to the daily press began when he was still quite young; from the mid-Nineties to the War he matured, carved out his niche, grew into his role. His trademark pieces would discuss the implications of proposed policy measures, of their specific provisions, on a very concrete level: they provided at once high-level instruction in applied economics to the general public, and expert policy advice to the government, which not infrequently amended pending bills in response to Einaudi's criticisms. Einaudi's interpretation of the broader forces then affecting the economy seems less successful, at least in the limited light of this reader's own views: that the prosperity of the Giolitti years was in essence the Italian component of a world-wide cyclical upswing induced by the recovery of British capital exports; and that Italy's growth was stunted by tariff walls that diverted capital and labor overseas. Einaudi was sensitive to the rise then in Italy's capital imports, to the resulting loosening of domestic financial contraints; and he attributed the "giolittian boom" to an international cyclical upswing rather than to the merits of improved domestic policies. The cycle he considers relevant is however the international cycle in prices rather than in capital flows: naturally enough given that the one was obvious and the other still to be discovered, less so given his life-long denial that inflation can promote growth. Einaudi was also opposed to tariff protection, but from an ordinary comparative-advantage perspective, a concern with the allocation of national rather than international resources. To his mind Italy's future lay in developing its specialized agriculture and its few resource-based industries, in shedding its excess labor; the potential of the Italian economy quite escaped him - as it escaped all of us, who still consider Italy's recent success a miracle. 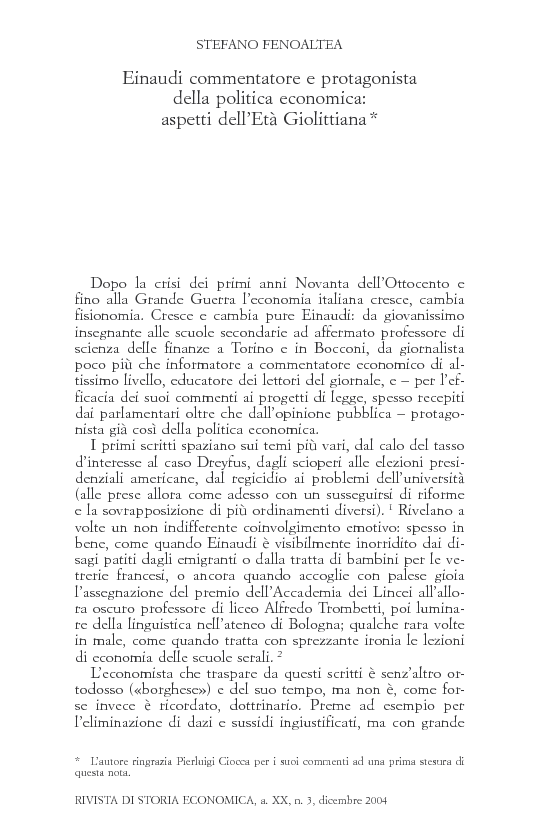