The article compares the Roman civil servants' approach to commercial society and economic policy with that of Catholic social thinkers, 1775 to 1850. It is shown that the functionaries based the commercial and fiscal reforms of the turn of the century on eighteenth-century political economy, and did not update their sources until the 'liberal' years 1846-48. The establishment of customs barriers led to a heavy-handed industrial protectionism. Luxury was approved of on condition that luxury goods were manufactured domestically. Considerations of equality and justice were hardly taken into account; for instance, regressive taxes on salt and the grinding of corn provided a very large share of state revenue. As far as Catholic thought is concerned, three stages are distinguishable. At the turn of the century writers like Bonald and Leopardi strongly opposed both commercial society, viewed as a source of moral corruption, and economic rationality as embodied in political economy. Catholic writers began to come to terms with capitalism and political economy in the 1830s. Taparelli d'Azeglio's "Saggio teoretico" (1840-43) associated a concern for fiscal justice - as shown by his condemnation of taxes on basic foodstuffs - with a plea for free trade as instrumental to world peace. Finally, in 1846-48 the two strands of thought came together, as a civil servant like Morichini came to advocate a freer trade as well as a system of taxation relieving the poor, and, at the same time, an intellectual like Rosmini put forward the main lines of a fiscal system ruling out indirect taxes on grounds of justice. But it was only an interlude. After 1848 the civil servants' renewed adherence to an eighteenth-century conception of economic statesmanship clashed with the Church's return to uncompromising hostility to commercial society. This clash may have delayed the Church's formulation of its own social doctrine until the "Rerum novarum" in 1891. 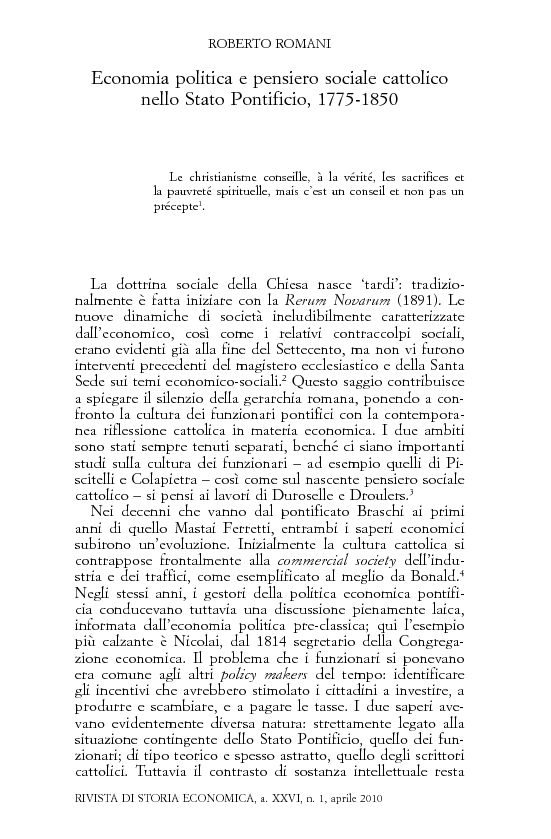