War demands that all the productive forces must be diverted from pursuits of peace. From an economic point of view, States have to impose an ample ("totalitarian") command over resources, to be converted to war purposes. Literature devoted to war economics focuses mainly on "real" aspects of production, quantity and quality of armaments, ways and means of factors of production organization, on military campaigns as affecting, or being affected, by war economy. This paper focuses, however, on the less considered "financial" aspect: war financing and its techniques. War financing requires funding military expenditure either by increased taxation or public borrowing; what remains - the "inflation gap", i.e. monetary financing - needs price control and rationing. The interwar period saw an increasing State intervention in the economy, to different extents: from Soviet Russia, to the American New Deal, to the Fascist regimes of Italy and Germany, less so in "liberal" Britain. This larger State role might theoretically allow a better organization of the war economy, in particular to avoid the disastrous outcome of the First World War in terms of inflation, which had destroyed the liberal foundations of European societies. In this paper, we consider Second War financing in three meaningful countries: the UK, Germany and Italy. The financial resources employed to cover war expenditure were rather different in these three countries: in terms of expenditure to national output, Italy was in a state of relevant inferiority (also given the declining national output). Italy's inflation performance was also much worse. About financing techniques, in the UK Keynes advocated a large recourse to progressive taxation and forced borrowing, and abhorred price control and rationing as "bolshevik". The British government's policy followed Keynes, but not entirely, also relying on administrative measures disliked by him. Germany and Italy relied mostly on monetary financing, the basic assumption being that price controls and rationing would divert monetary surpluses towards bank deposits, which would in turn finance State expenditure, by direct lending or investing in T-bonds. In Italy, this mechanism was described as "circuito dei capitali" and formalized at the Istituto di finanza corporativa. In Germany, at an earlier stage of war preparations, an ample recourse to quasi-money, off-balance sheet instruments - the MeFo bills created by Schacht - was practiced. The experiment in both countries failed when the long war, military defeats, loss of confidence, provoked a huge shift from bank deposits to circulation, fuelling a destructive inflation. The paper concludes that the dividing line between totalitarian and liberal States in war financing should not be found in the size of the State intervention (an invasive government role was present anywhere), but rather in the different emphasis placed on fiscal versus monetary financing. 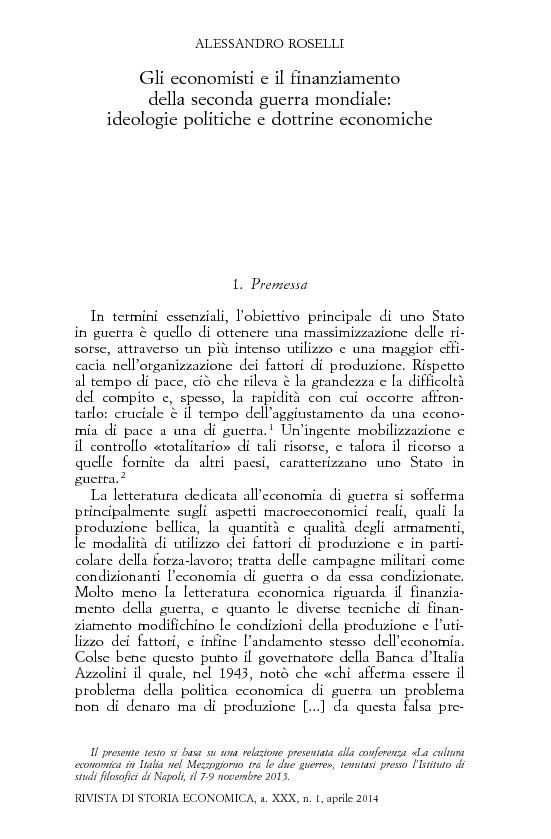