For about three centuries, from 1300 to 1600, the leader European economy was the Italian one. At the end of the XVIth century, the economic system still revealed the features of its supremacy: high per capita product, high wages, high prices, large exports of industrial goods and commercial and banking services. The equilibrium of the economic system, located in Northen and Central cities, was supported by a relatively lively agrarian sector and by imports from the South. This equilibrium broke at the end of the XVIth century and till the second half of the XVIIth a long period of instability ensued. During this period agricultural production fell, the industrial and commercial activities declined or collapsed, the exchanges between North and South diminished and, for some products, broke off. The strong demographic decline allowed to restore the equilibrium at a lower level in the last decades of the century. A new economic system developed, after the long period of crisis, thanks to internal changes and innovations coming from outside. Maize, rice and mulberry tree were the main novelties of the system. A recovery was possible in front of the population growth taking place in Italy as elsewhere in Europe around 1660. At the middle of the XVIIIth century per capita product was in Central and Northen Italy more or less equivalent to that of two centuries before. Yet the economic primacy was over. Other economic systems held then the leadership. 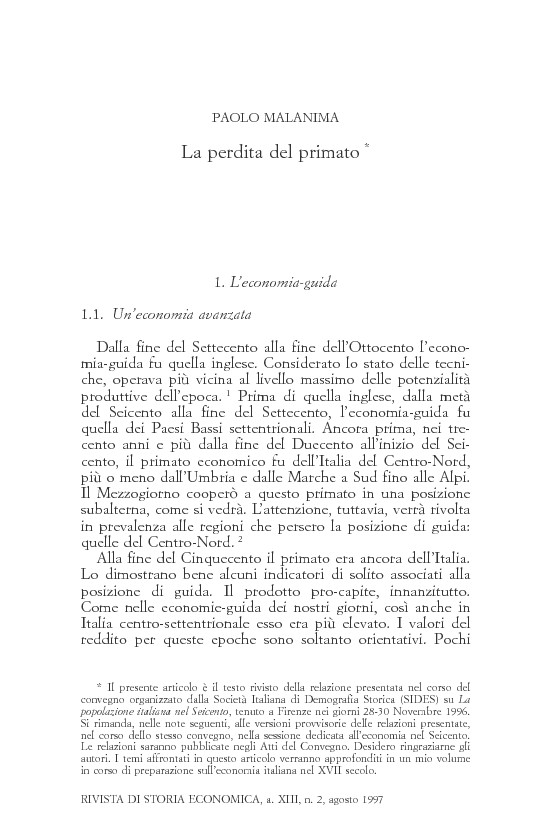