This essay shows the evolution of the Italian Electrical system identifying four phases: the origins (1880s-1920s); the phase of the great "grids" (1920s-40s); that of the integrated national system (1950s-1970s); the rise of new technologies of generation and the opening of the market for electricity (from the 1980s). The essay shows also that each technological phase corresponds to an organizational formula (local private or municipal firms in the first phase, regional private firms in the age of "grids"; big firms, usually publicly owned, in the phase of the integrated systems) and to a specific practice of tariffs (from a simple forfait tariff in the first phase, to sophisticated shadow marginal price in the eve of national integrated systems, in the third phase; to a price cap approach in the current phase of privatization). The essay describes how this general, complex dynamics of the electrical systems shows also original national features. For example, the phase of "grids", in Italy, shows a regional pattern instead of a national one, because of the prevalence of the hydro generation, of the conflict among financial groups with different strategies of growth and of many municipally owned firms controlling some large market like Turin, Milan and Rome. The third phase shows a great time lag in Italy in comparison with France or United Kingdom, which is essentially due to the private property still prevailing, but after the nationalisation of 1962, it proceeds to a very rapid integration of production, transmission and distribution. In Italy, the regulatory system is very original and quite uneffective as a whole. It is in operation in different forms since the Post World War I, and shows a great range of purposes: it goes from a simple price control during the periods of inflation, to anti-monopolistic intervention, up to considering energy policy as a part of economic planning in the Sixties. 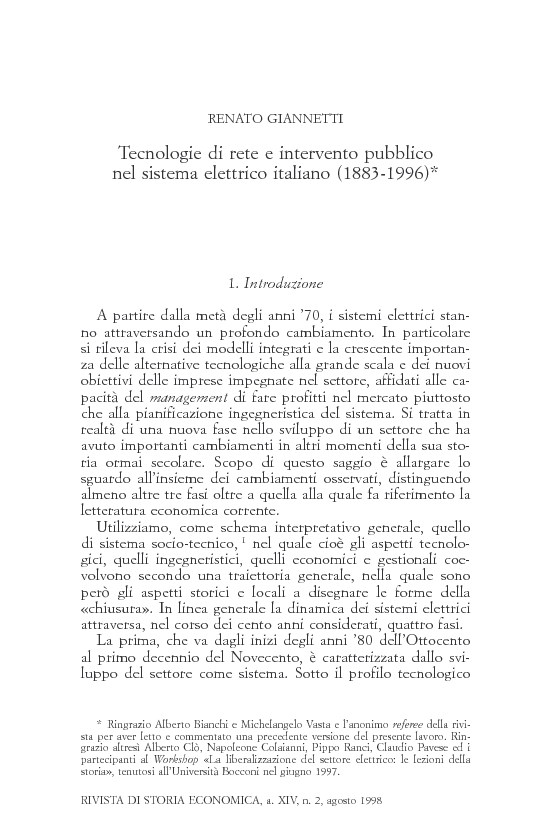