As a young discipline as it is, economic history has been characterised by a rich methodological debate and, at times, by a real methodological fight. Since the Forties the Anglo-Saxon schools have been supporting "rigorous" and "scientific" research programs, featured by precise and explicit analytical boundaries, a problematic approach and the use of tools and methods borrowed by economics. On the other side stand the continental schools, championing the hermeneutic approach as well as a "humanistic" conception of economic history: here a comprehensive vision of history prevails, in which analysis of specific (economic) aspects is allowed for only if conceived as a part of the whole. The purpose of this essay is to contribute to the explanation of the origin and evolution of such a dichotomy by placing the development of the discipline within the evolution of Western thought and culture of this century. More specifically it tries to analyse the connections between economic history and contemporary epistemology. In this perspective the analogy with the traditional division between analytical philosophy and continental philosophy, proves to be useful for methodological explanation in economic history too: the first has been long prevailing in the Anglo-Saxon culture, the second in the continental one. This partition evokes as well as embraces the antithesis between scientific culture and humanist culture, between logic and rhetoric, analysis and interpretation, conceptual clarification and visions of the world. Therefore the essay cautiously maintains that the opposition quite clearly loomed in the post W.W.II decades between Anglo-American and European economic histories can be thought of as a specific, particular form of the wider opposition between "analytical style" and "continental style". 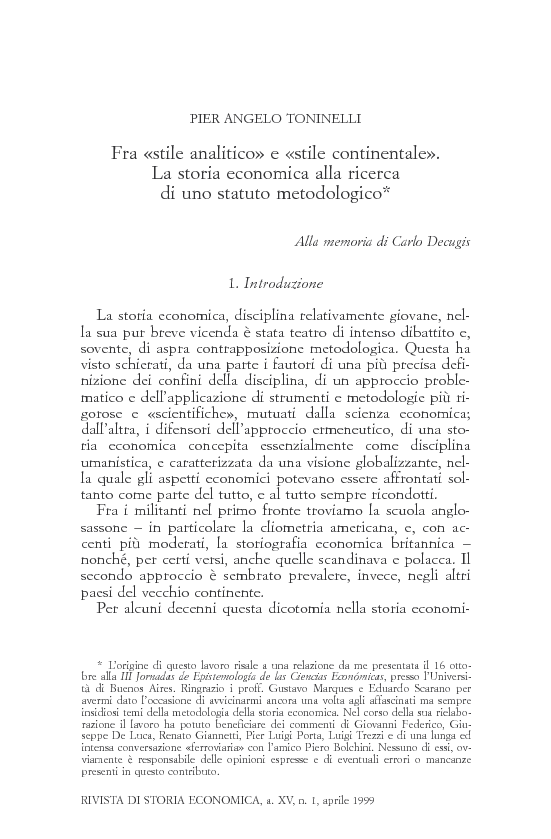