The role of time concerning internal perception, and eventually its priority on space, constituted an intriguing question up to the end of the 19th century. The time-succession of the phenomena induced James and Bergson to face the "antithesis" between ideas as occurring in succession in consciousness and their simultaneous representation. Neither was the idea of duration, as unit of the temporal perception, satisfactory. Indeed, though the sensation of duration embraces only a few seconds, nevertheless it has to be intended as extension, whose units are constructed by mental additions of "bits" of time. A century later, neurobiologists have started searching the "neural code" employed by the cortical neurons which convey information about the sensory world. The traditional idea of "rate coding", depending on the number of spikes in a fixed time window, leaves the question open whether other features (i.e. temporal features) of the spike trains may carry information. The analysis of the temporal waveforms called "principal components" and the hypothesis of the "temporal correlation" (based on synchronous neuronal oscillations) are examined to explain the way spike volleys represent visual features. Finally, a new concept of neural code, built on the timing precision, seems to constitute a relevant alternative to the firing rate code; and it allows us to explore how the brain can obtain an integrated image of the world from pulses which have no similarity at all with the external stimuli. 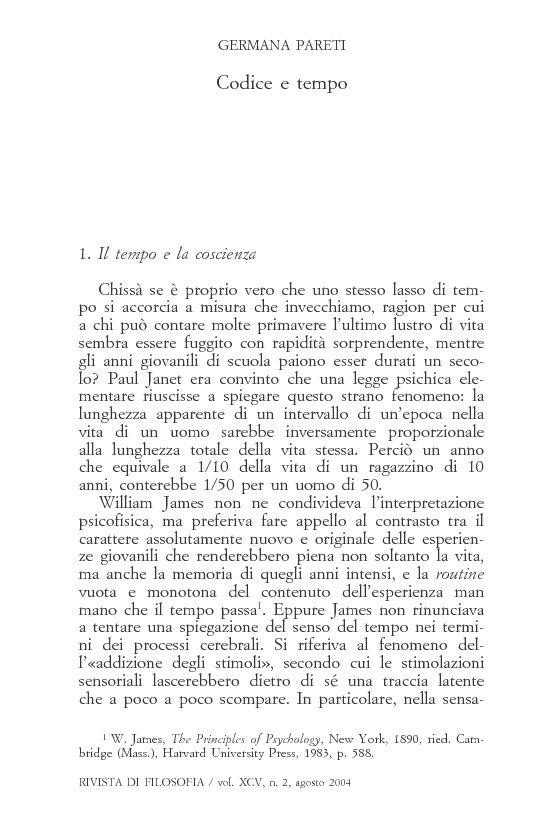