The aim of this paper is to investigate the correlations between feminist thought and moral philosophy. It will be shown how feminist thought can contribute to the overall process of revision of universalist and impartialist approaches to ethics which is ongoing in the philosophical arena. Feminism and ethics are in fact strictly intertwined, not only because feminism has posed one of the most important questions of justice in the history of humanity, namely the oppression of one half of it, but also because, in coping with this issue, it has put under pressure the very idea of ethics as justice, as well as the ideal of equality, and has raised the problem of the moral consideration of different subjects, questioning the very idea of subjectivity, per se or in its relations with morality. The development of feminist thought will be considered as divided into three main phases (emancipation, sexual difference theories, post-gender theories), characterized by different ways of thinking to women's subjectivity and liberty. Their correlation with different ways of thinking morality will be examined with a focus on the notion of moral subject (abstract, relational or opaque). In doing so the paper will examine the richness of feminist considerations for the recent critical reflexion on universalism and impartialism in moral theories, and will stress the relevance of a refined version of virtue ethics focusing on humility and criticism in giving account of oneself and the others in the context of relational ethics. 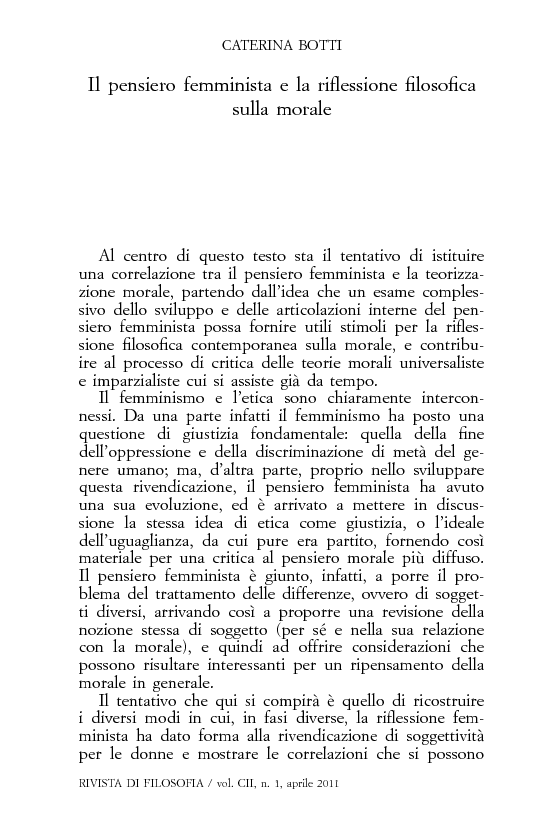