Erasmus' statement that Seneca might be read either as a Christian or as a pagan hinted at a paleo-Christian forgery, the correspondence between the Roman philosopher and St. Paul. This subtle remark was a reaction to Augustine's severe negative judgment regarding Seneca and the Stoics as theorists of pagan egocentrism, deniers of Adam's sin and of divine grace, and therefore close to Pelagius' heresy. This accusation was echoed by Cornelius Jansen in the XVIIth century and aroused a multifaceted theological quarrel for and against Seneca, as the eloquent supporter of «disguised vices» and «Stoic pride». Careful not to use 'French' quotation marks Jesuits crossed swords with Jansenists. Christian Stoics, like Justus Lipsius and his followers, vindicated the dignity and autonomy of the ethics of the ancient philosopher, (even if he was) unaware of the Revelation. Humanists and natural right jurists, sceptics and freethinkers - from Montaigne to La Mothe le Vayer, from Bayle to Shaftesbury - shared Seneca's concept of virtue as the foundation of a new secular morals. From this viewpoint, the paper tries to reassess the revival of the Corpus Senecanum in the crisis of the French Enlightenment, particularly d'Holbach's plea for éthocratie and Diderot's subtler research of a science des moeurs in his last published work, the "Essai sur Sénèque" (usually referred to as "Essai sur les règnes de Claude et de Néron"?) 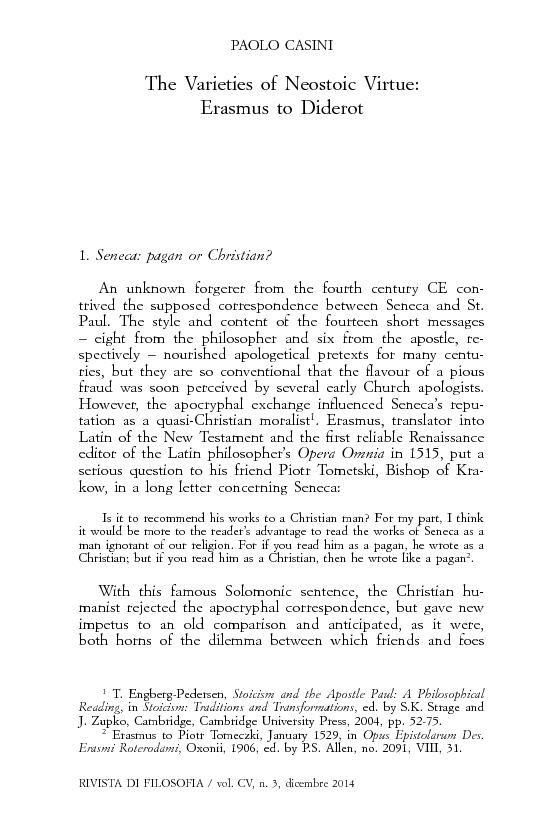