During the 18th century natural history turned into a history of nature, i.e. a consideration of (living) nature understood as a multiplicity of species which have their beginning and eventually their end along the time-line. In the 19th century the theory of evolution connected natural and human development, discovering the existence of a long past before the birth of human kind, and in particular before "Homo sapiens". (Human) history is the continuation of a «world before history», from which originated specifically "human" culture - even better: the variety of human "cultures". Of course, biological evolution and historical development have different features, and cannot be investigated by means of the same (or a similar) methodological approach. But, on the other hand, they are also strictly interconnected, and present some common determinations, like the plurality and the contingency of their process, as well as its unpredictability. Natural and human historical processes lack any direction or purpose, and they don't follow any pattern. They depend on manifold series of conditions, but also on chance: they are the outcome of the interrelation between invariance and "hasard" (Jacques Monod). Contingency doesn't mean an absolute indeterminateness, but the impossibility of a complete determination. This idea has a direct effect on our conception of 'science'. The old dichotomy between natural and human sciences is no longer appropriate. The epistemological dualism of the historicist tradition - e.g. Droysen or Dilthey - doesn't have any better foundations than the neopositivistic myth of «unified science». «History» is the continuation of the evolutionary process, and both have - within their different methods - the same categorial ground. 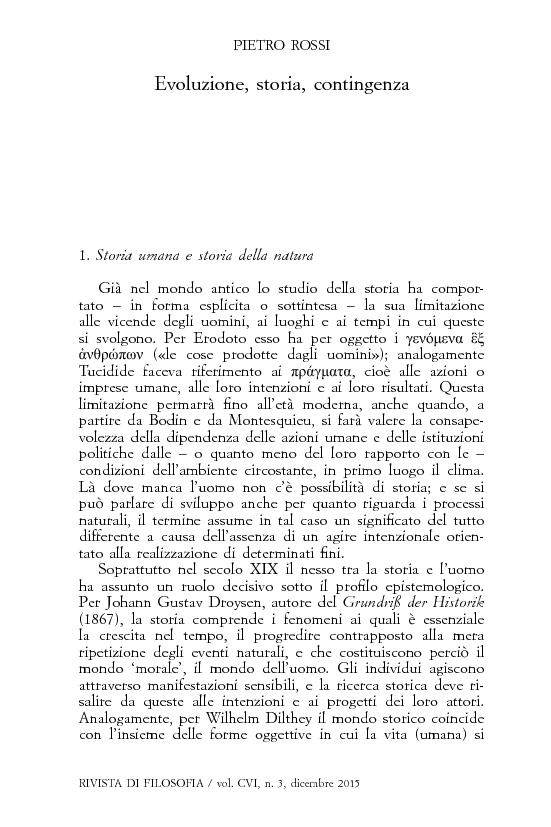