The growing appeal to «nothingness» in Giacomo Leopardi's prose and verse since 1821 is, much more than a pessimistic feeling, a complex idea supported by a subtly reasoned philosophical background. Though the poet declared to have been an apprentice in philosophy until his twenties, he imbibed since his earlier years the basic principles of the corpuscular philosophy of Epicurus and Lucretius, even via his remarkable theological, religious and scientific education and his intense erudite self-instruction. Thanks to the conformist textbooks he used, he was well aware of the 17th and 18th-centuries controversies by Bayle, Locke, Leibniz and the French "philosophes" concerning such topics as theodicy, teleology, thinking matter and materialism. Finally Strato of Lampsacus became the intellectual hero and the symbol of his nihilarian cosmology where, against the Epicurean maxim "nihil ex nihilo fit", the physical world stems out from nil and returns to it. From this vantagepoint, this paper intends to reject the gross misunderstanding of considering Leopardi as a «prophet of European Nichilism», i.e. a forerunner of the German anti-metaphysical ideology of Schopenhauer, Nietzsche and Heidegger and their postmodern followers, which is based in a very different speculative context that Leopardi never practiced. 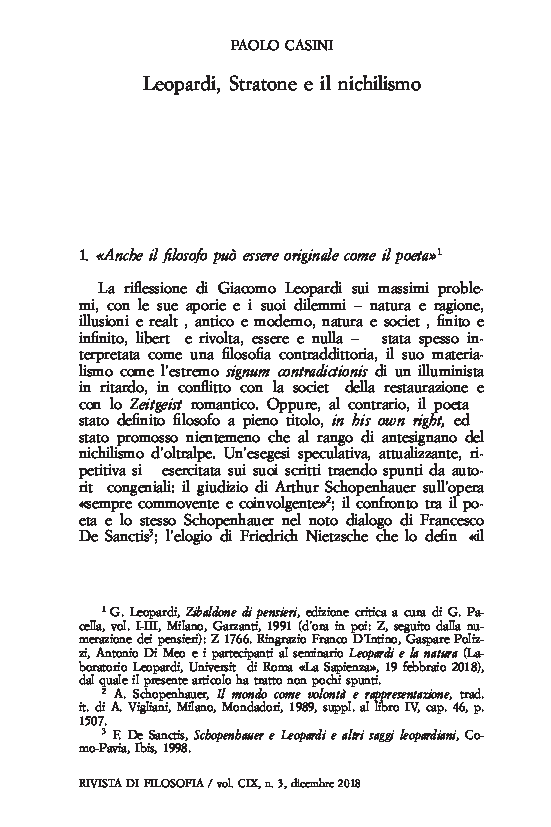