The essay is devoted to the personality and work of Carlo Augusto Viano, a very outstanding Italian scholar of philosophy and history of philosophy, who belonged to the generation born around 1930, and grown up during the second World War. Viano studied in Turin and graduated in 1952 with a dissertation on the logic of Aristotle. In 1956 he was granted the “venia legendiµ and in 1964 he became professor of History of philosophy. The intellectual education of Viano was strongly marked by the «new Enlightenment» of Nicola Abbagnano, Norberto Bobbio and other younger scholars who were engaged – after the decline of Croce’s and Gentile’s idealism – in the search for new relationships with the most important philosophical orientations both in Europe and North America: from philosophy of existence to Dewey’s pragmatism, logical positivism and philosophy of science. After writing a book on Aristotle’ logic (1955) and various remarkable essays on the dialectics and the theories of rhetoric in Greek philosophy, Viano published a complete translation both of the Politics and the Constitution of Athens (1955), and of the Aristotle’s Metaphysics (1974); he later wrote a book, La selva delle somiglianze (The Wood of the resemblances), published 1985, on the relationship between philosophy and medicine in the ancient world. His interest moved then toward modern thought, and especially toward the origins of Enlightenment in the English culture of the late XVII century. In 1960 Viano published an important book on John Locke: dal razionalismo all’illuminismo (John Locke: from rationalism to Enlightenment), which is one of the most remarkable contributions – beside Paolo Rossi’s Bacon – of the new generation of Italian historians of philosophy. At the same time he published the edition of Locke’s Scritti editi e inediti sulla tolleranza (Published and unpublished writings on tolerance). Later, in the last decade of the past century, Viano edited – together with the author of this essay – a great Storia della filosofia (History of philosophy), published in six volumes and 136 chapters, in which the most qualified Italian scholars of the discipline (and also some young scholars) took part. From the late 1970s Viano combined the study of history of ancient and modern philosophy with a most manifest engagement in the philosophical discussion, focusing on the critique of the Italian philosophical tradition, and also to the critique of new orientations like (for example) the «weak thinking». Above all he attended to the problems of ethics, especially of bioethics, and he discussed such themes as the legitimacy of abortion and euthanasia. That led him to the critique of traditional medical deontology, and above all of the claims of a religious control of the personal sphere, not only in the name of the religious freedom, but also overall of the «freedom from religion». This new theoretical interest brought Viano to explore new chapters of the philosophical tradition in such books as Le imposture degli antichi e i miracoli dei moderni (The Impostures of the ancients and the miracles of the moderns, 2005), and later La scintilla di Caino. Storia della coscienza e dei suoi usi (Cain’s Spark. History of Consciousness and its Uses, 2013) – two very innovatory books, which join the interest for the ancient philosophical theories with the problems of current philosophical debates. 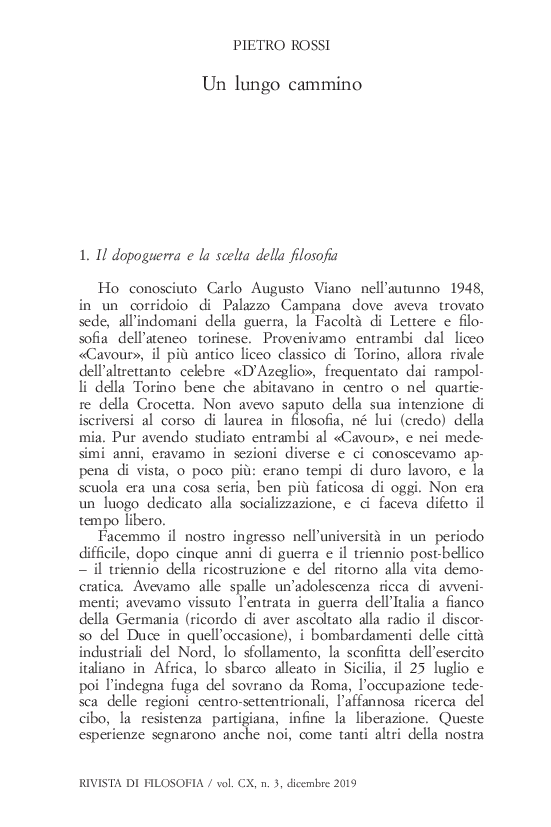