In medieval Europe and Islamic world, the survival of the soul after the death is a commonly accepted truth of faith. However, on a more strictly philosophical level, the question is tackled from very different, if not divergent, and not so obvious perspectives. The most immediate division in this regard is that between those who admit that the immortality of the soul can be demonstrated with rational arguments, and those who believe that it is only a truth of faith. The arguments in favour of the immortality of the soul rely on different faculties or aspects of the soul itself: some insist mainly on the intellective part, others on the volitive part, or more precisely on the freedom of the will. A further division can be drawn between those who grant the immortality of the entire individual soul and those who instead consider as immortal only a part or a function of it, namely the intellect. Instead of concentrating on a single aspect or author, this article outlines a few models of these ramifications, referring to Thomas Aquinas, Peter of John Olivi, John Duns Scotus, Dante, William of Ockham, and, en passant, Averroes. In its conclusion, it focuses on the ‘political’ aspect of the issue, as it seems to emerge in those philosophers (like al-Fārābī) who consider immortality not as a natural and original prerogative of the soul, but as the result of a process that depends, in this life, both on the exercise of one’s own intellectual capacity and on the socio-political conditions that make it possible. 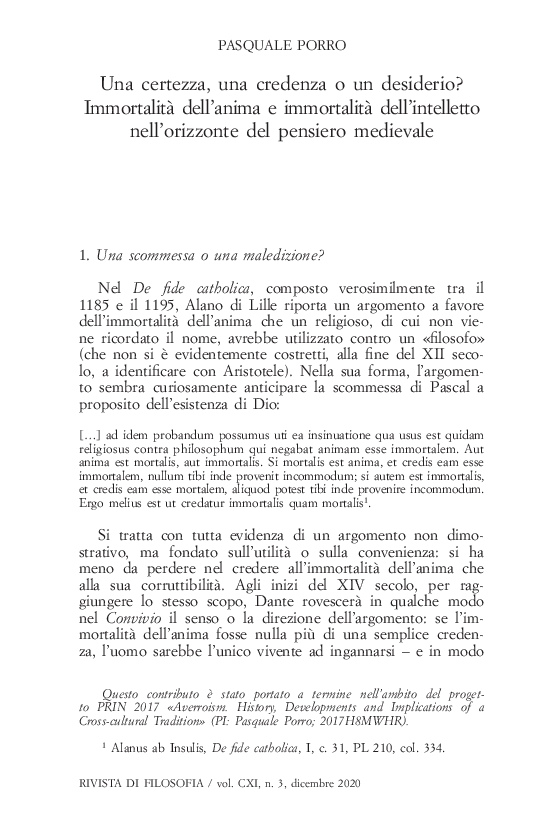