The article deals with the question of the immortality of the soul in Kant’s thought, interpreting Kant’s philosophical attitude towards this notion in the framework of his attempt to find a role for metaphysical objects in critical philosophy. In this sense, a central role is played by the concept of highest good as union of morality and happiness. At least up to the third Critique, Kant presents God and immortality – the objects of Wolff’s metaphysica specialis – as the conditions of the realization of the highest good, i.e. of a full realization of morality. After a first outline in the Critique of Pure Reason, Kant gives a proper systematic function to God and immortality in the Critique of Practical Reason, with the doctrine of postulates, while in the Critique of Judgment immortality is mentioned though not having a proper relevance for the highest good. At the same time, even Kant’s rationalist theology, grounded upon the idea of the highest good, shows its weakness in the essay on theodicy (1791). In the last decade of the 18th century Kant is more and more concerned about a worldly realization of morality, and the highest good receives a worldly character, losing its metaphysical significance – as evidenced by the Metaphysics of Morals. After Kant, Fichte will be the only idealist philosopher that does show a genuine interest for the question of immortality, giving it a peculiar, ontological meaning. 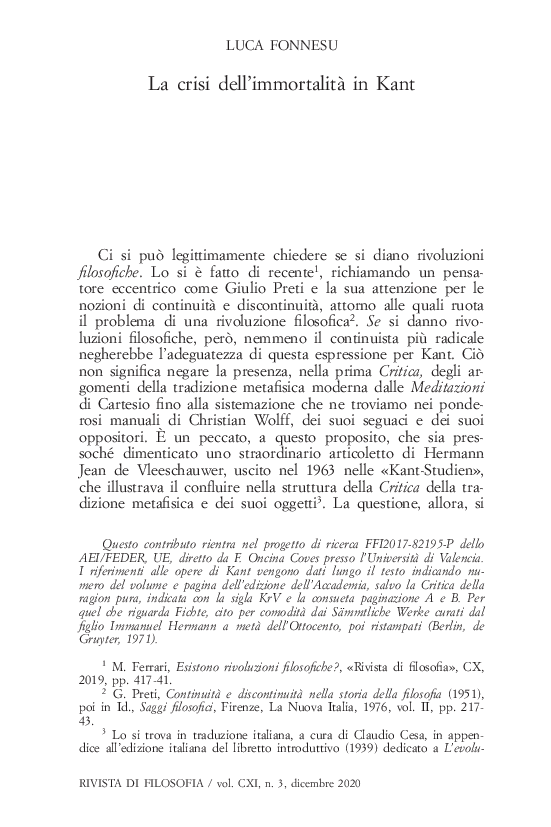