Two women kissing each other. Two men making love. Disgust? Why? In her book From Disgust to Humanity: Sexual Orientation and Constitutional Law the philosopher Martha C. Nussbaum argues that disgust has long been among the fundamental motivations of those who are fighting for legal discrimination against lesbian and gay citizens. When confronted with same-sex acts and relationships, she writes, they experience «a deep aversion akin to that inspired by bodily wastes, slimy insects, and spoiled food - and then cite that very reaction to justify a range of legal restrictions, from sodomy laws to bans on same-sex marriage». The politics of disgust must be confronted directly, for it contradicts the basic principle of the equality of all citizens under the law. In its place Nussbaum offers a «politics of humanity», based not merely on respect, but something akin to empathy, imagination, an active effort to see the world from lesbians and gay men perspectives. Dialoguing with Nussbaum's statements, Vittorio Lingiardi and Nicla Vassallo deal with the topics of disgust and fear, nature and marriage, homophobia and minority stress; and they try to trace psychological and cultural origins of heterosexism, and to reveal its philosophical fallacies. 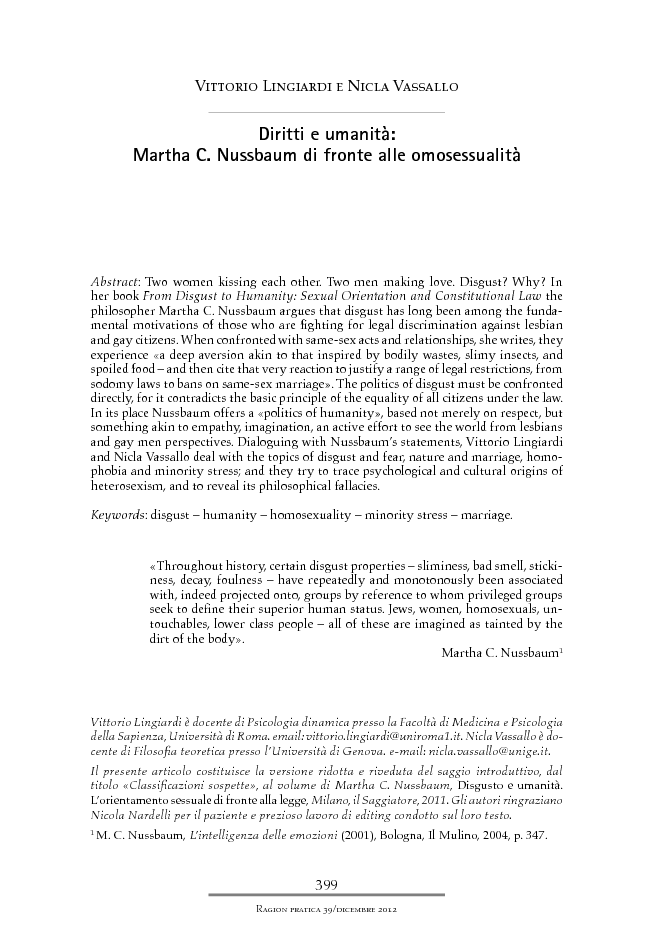