The Eyes of the People. Democracy in an Age of Spectatorship by Jeffrey Edward Green (2010) questions the hegemonic discourse prevailing in contemporary democratic theory according to which democracy is conceptualized as a vocal, decision- and law-centered form of government, and a dominant thread running throughout political thought over the last 150 years. On these bases, he juxtaposes two diverging conceptualizations of democratic life: the deliberative and the plebiscitary notions, the former based on the primacy of the voice, and the latter on the primacy of the eye. In particular, plebiscitary, ocular democracy relocates the object of popular power in the leader, rather than the law; its organ in the People's gaze, rather than its decision; its critical idea in leaders' candor (i.e., the institutional prerequisite of leaders not being in control of the conditions of their public activity) rather than the People's autonomy. As a result, Green conveys a post-representative and post-deliberative reading of mass democracy that aims at defending plebiscitarianism, both normatively and ethically. In the present paper I shall develop a critical analysis of Green's book and suggest that contemporary political theory should develop normative models for empowering popular sovereignty through a reconceptualization, rather than a dismissal, of representative politics. 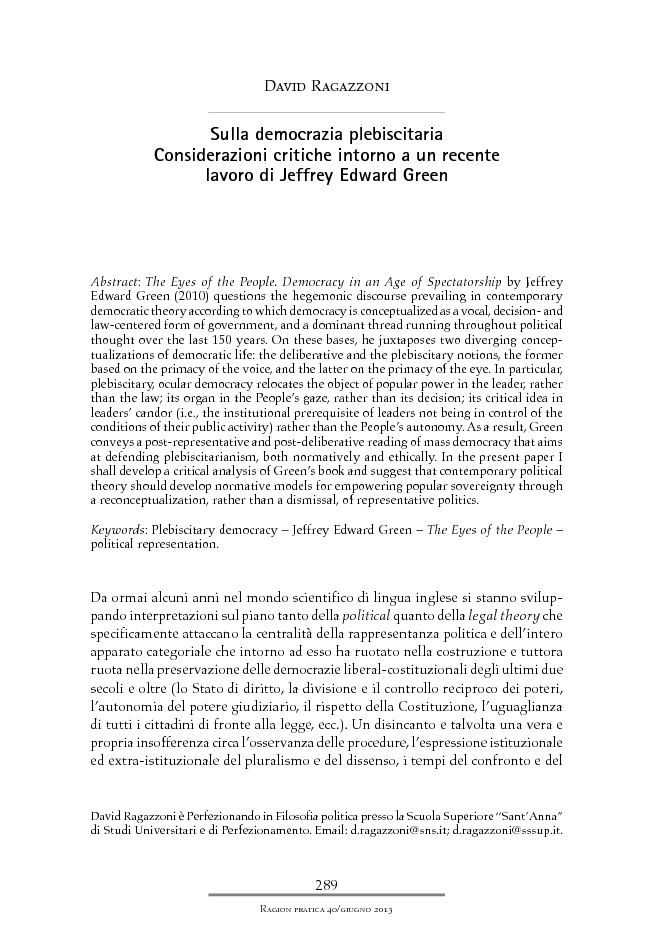