In the history of modern political philosophy, the concept of «potentia» has been interpreted sometimes as power, other times as possibility. The union - provisional and unstable, but real - between these two interpretations took place in the modern State, in which the reason has become a political system and the «potentia» has stood as guarantor for justice and freedom. Nevertheless, during the 20th century a radical shift has occurred from the «potentia» understood as possibility to the «potentia» intended as power: the idea according to which the field of possibility is larger than the field of reality was abandoned. However, the concept of «potentia» manifests itself by necessity also as a place of possibility, as a container of the faculty and as an expression of capacity; as everything that precedes the concrete actualization or the full realization. Therefore, it is not inappropriate to restore philosophical and political actuality to the intrinsic complexity of the category of «potentia», which contains the power and the possibility at the same time. In this way, an open view of the individual and social acting arises, enhanced by the dimension of possibility and freedom, of contingency and change, against any image of reality that is fixed in a narrow and deterministic view. 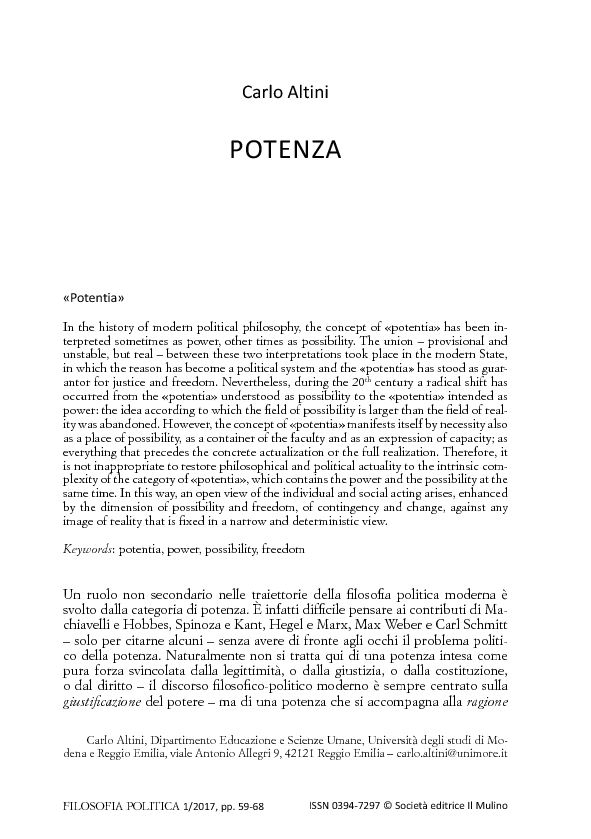