On 11 February 2021, a statement issued by the Rome Medical Association informed the public that some doctors were refusing the Astrazeneca vaccine. This fact, together with the media coverage it has attracted, has led to a growing belief among the population that there are first- and second-league vaccines. Specifically, that the former have been developed by Pfizer whereas the latter have been developed by Astrazeneca. This belief stems from considerations about the efficacy rates of both; rates that at first glance, from the figures presented by the media, seem very different from each other. In fact, when talking about the efficacy of a vaccine it is necessary to distinguish between “absolute efficacyµ (ARR) and “relative efficacyµ (RRR). This distinction is fundamental because while the first concerns effectiveness with respect to the entire population, the second concerns effectiveness with respect to the experimental and control group. These two measures are very different from each other and a misunderstanding of them can lead to overestimating a difference which in reality is small. The starting hypothesis of this work is that individuals, be them doctors (therefore more similar to terms such as vaccines, experimental groups, samples and efficacy) or not, when hearing talk of effectiveness put in place strategies of thought that lead them to think of absolute rather than relative effectiveness. To test this hypothesis, three reasoning tasks were presented following a whithin-participant protocol to 500 participants. The results show that the thought strategies put in place when it comes to “effectivenessµ lead to incorrectly equate absolute efficiency to relative efficiency. In this way the difference between vaccines is overestimated and a scenario is envisaged where there are first- and second-league vaccines. Results document that this error also happens for those who practice medicine. Therefore, it becomes urgent to take action to bring forward a clear communication that clearly distinguishes between ARR and RRR. 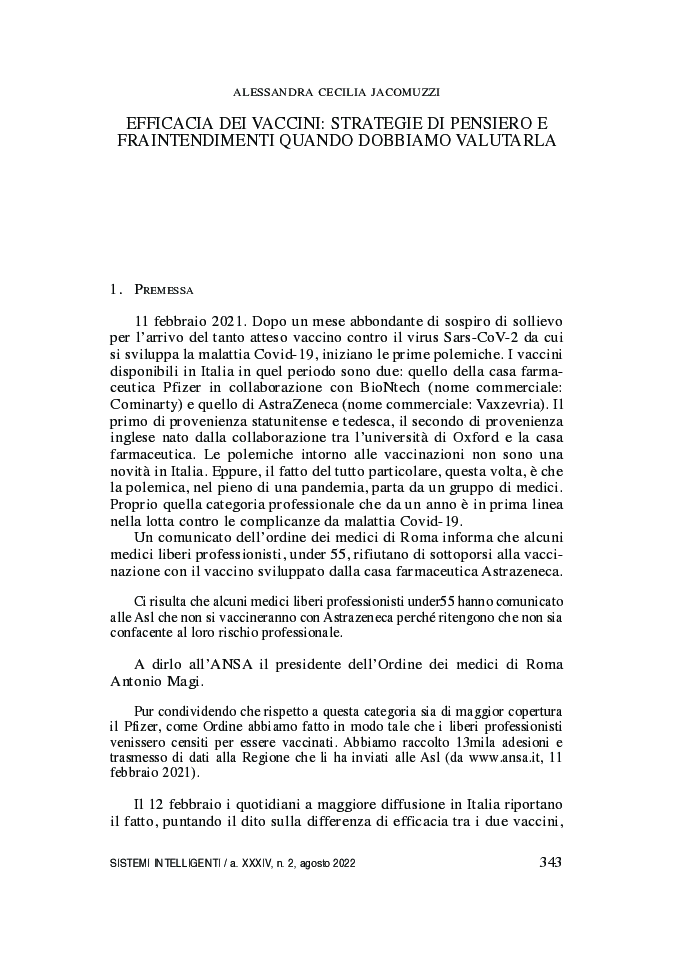