New studies on the unconscious show an increasing reciprocal interest between psychoanalysts on the one hand and, on the other, neuroscientists and philosophers of mind who are oriented toward naturalism and materialism. This shared interest was already manifest in Freud's Entwurf der Psychologie and other essays. Furthermore, Freud, like most contemporary naturalists, denied Descartes' identification of mind to consciousness thanks to Brentano's concept of intentionality. Freud was able to maintain that unconscious states such as slips of the tongue are strictly mental acts endowed with a goal, a content and a meaning, although they are not conscious, only because he followed Brentano and did not define mentality by its identification to consciousness but by its being endowed with intentionality. However, Freud, unlike Brentano, was not a dualist and oscillated between materialism and functionalism with regard to the Mind-Body Problem. Therefore, one can read in Freud's psychoanalysis the attempt to reconcile naturalism with an anticartesian concept of mentality based on intentionality and not on consciousness. The same attempt can be recognized in philosophers of mind such as D.C. Dennett or the Churchlands. More in general, consciousness and the self can be naturalized only if intentionality has been previously reduced to a first order property of brain dynamics. In this perspective consciousness is reducible to a higher order property (a "format") that gives unity and coherence to certain parts of brain activity. To sum up, those psychoanalysts who correct Freud's theories in the light of contemporary neurosciences do not betray him but realize his deepest aspiration. 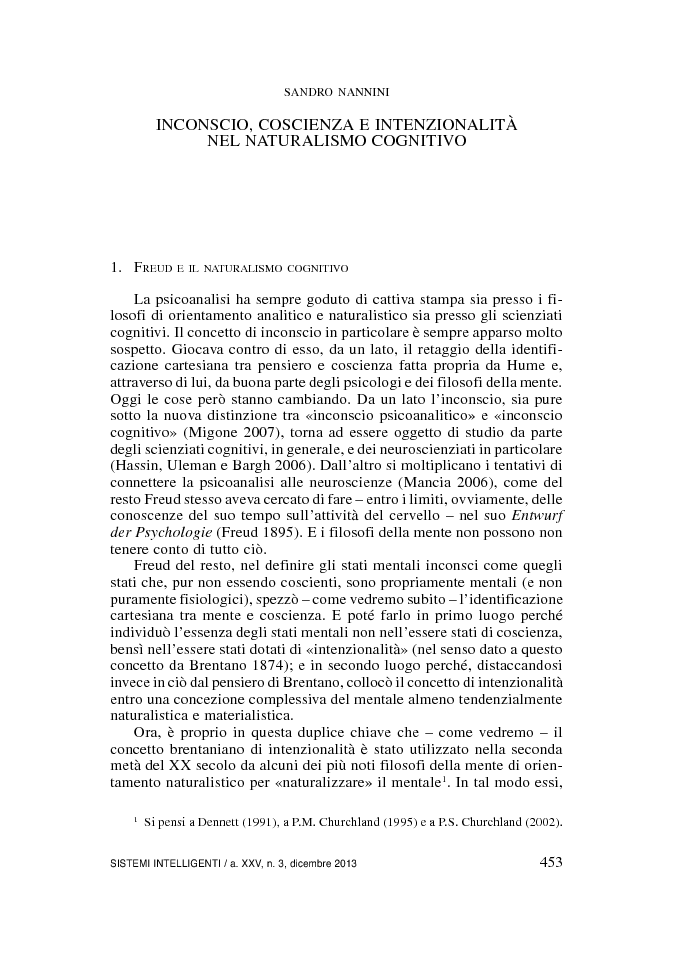